This is Botswana, by Peter Joyce, Daryl Balfour and Sharna Balfour 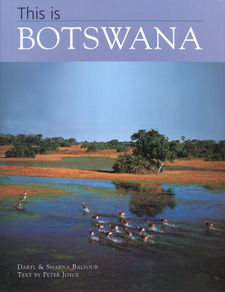 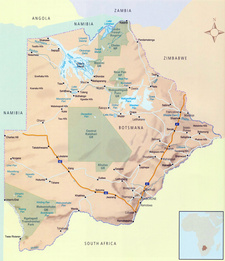 This is Botswana that highly acclaimed wildlife photographers Daryl and Sharna Balfour have captured so evocatively, producing a superb visual essay. Peter Joyce's concisely written and eminently readable text is an admirable companion to the splendid pictures.

Probably the most important word in Botswana, a word that holds profound significance for virtually every one of its inhabitants, is 'pula'. It means 'rain'. It is also a form of greeting, an expression of good wishes for the future, and the name for the national unit of currency, but these are secondary applications, definitions that simply emphasize the primacy of and pay tribute to the role of rain in this vast and mostly dry part of south-central Africa. In Botswana, water is the most precious of all commodities. The great majority of the people depend in one way or another on the land for their well-being, and in many instances for their very survival, and the land, all too often, is unforgiving in its arid harshness. The rains are sporadic .and unreliable; drought is the norm rather than the exception; huge tracts of territory have no surface moisture; the only permanent sources are the Okavango, the Linyanti-Chobe, and the tributaries of the Shashe and the Limpopo rivers, which bring sustenance to segments of the far northern region but leave the greater part of the country untouched. These watercourses, however, and especially the first two, combine to make of Botswana one of the African continent's finest tourist destinations. The Okavango, born in the uplands of Angola to the north-west, flows into and then spreads over the sandy spaces of the Kalahari to form an immense and wondrous inland delta of lagoon and labyrinthine channel, palm-fringed island and fertile floodplain. Scores of safari lodges and camps have been established in and around this watery wilderness, and in the game-rich Moremi and Chobe reserves farther to the north, and between them they offer visitors the best of several worlds, appealing variously to the game-viewer and bird-watcher, the hunter and the sporting fisherman, the explorer of hidden places and the lover of Africa at its loveliest and least spoilt. Botswana, which in the old colonial days was known as Bechuanaland, is a big country, scantily populated, landlocked. Its modern name was assumed at independence in 1 966 and is derived from the Setswana language, spoken by the largest of the ethnic groupings that in sparse and uneven fashion inhabit a region larger than France and only a little smaller than the American state of Texas. The population is at its densest in the comparatively well-watered southeast, along the common border with South Africa's North West and Limpopo provinces. Botswana also shares frontiers with the Northern Cape province in the south, with Zimbabwe in the east and north-east, and with the desert wastelands of Namibia in the west. To the north-west, in striking physical contrast, is Namibia's Caprivi Strip, a long, narrow and lushly vegetated finger of land distinguished by its rivers and marshlands. A tiny linear segment of this region, stretching just 700 metres from end to end, serves to divide Botswana from the Republic of Zambia, the world's shortest international boundary.

This is an excerpt from the book: This is Botswana, by Peter Joyce, Daryl Balfour and Sharna Balfour.