The Witbooi, by Ludwig Helbig and Werner Hillebrecht 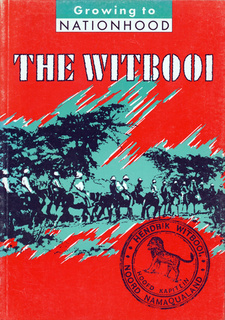 Guerrilla war against the Germans

Shortly after the ecstatic victory celebration in Windhoek came the first bad news. Hendrik Witbooi had by no means fled precipitately with his warriors, but had gathered them together, and secretly followed the withdrawing Germans. He succeeded in taking 40 horses from the Germans' baggage train. The Germans now had only 70 horses available; in a country where the horse was the fastest means of travel, this was a difficult situation. Curt von Francois therefore immediately opened negotiations with a German dealer and bought from him 120 good horses, which had however the great disadvantage that they were far away on pasture in the savannah. The very next day one of the herdsmen appeared in Windhoek and reported that the Witbooi had stolen these horses too. Thus only a few days after the attack on Hoornkrans, Hendrik Witbooi regained the initiative. He now had 300 horses compared with the 70 of the German troops. Then 200 Witbooi fighters actually appeared before the gates of Windhoek and involved the German troops in a typical engagement: they made a lightning strike from several sides, and as soon as the German troops started shooting at them they turned away waving their hats - mocking the German soldiers - and rode off. Von Francois undertook some incursions into the country, but his soldiers did not know the terrain. They did not know where the watering-places were. So they moved laboriously with their ox-wagons through the region - and they failed to discover the Witbooi, who were fast and mobile, who knew their land thoroughly, and who did not mind hunger and thirst. So von Francois sat most of the time in Windhoek and waited longingly for the cannon that he had ordered from Germany. In this way control over the country passed to Hendrik Witbooi. A German trader who wanted to drive 500 oxen to the south applied not to von Francois for protection but to Hendrik Witbooi. He said later: 'Witbooi knew very well that we were Germans, with whom he was at war, and that he could capture the oxen without firing a shot, but we also knew that Hendrik would keep his word, and we were not disappointed. In August 1893 the Witbooi made a great coup. A large transport was on its way from Walvis Bay to Windhoek, where it was awaited with longing. More than 20 teams of oxen fell into the hands of the guerrilla fighters. Windhoek ran into serious supply difficulties. The Germans seethed with powerless rage. Hendrik Witbooi's success had a mobilizing effect upon the Nama in the country. People moved from all sides to join him. When he had to leave Hoornkrans, he had some 200 men capable of carrying weapons. Six months later they had increased to 600, with 400 guns and 300 horses. Now Hendrik Witbooi was the real master in Great Namaqualand. The German farmer Hermann had to learn this too. On the instruction of the German Colonial Society for South West Africa, Hermann had built up a model farm at Kubub in the south of the country. Hendrik Witbooi sent a messenger to tell him that he did not have the Witbooi permission to farm there. Hermann considered this an insult, and turned to von François for protection. He was not in a position to protect this farm, which lay many hundreds of kilometres from Windhoek. Shortly afterwards Hendrik Witbooi attacked the farm. Breeding animals to a value of 80,000 marks - an enormous amount then - fell into his hands. He immediately bartered them with traders for guns and ammunition. [...]

This is an extract from the book: The Witbooi, by Ludwig Helbig and Werner Hillebrecht.

A new angle of perspective on the history of The Witbooi after Namibia had become independent.