The Unlikely Genius of Dr Cuthbert Kambazuma, by Chris Wadman 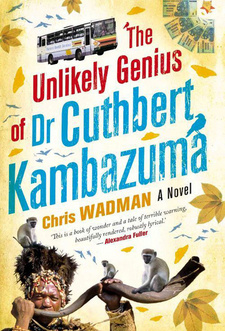 Chris Wadman knows Zimbabwe intimately and in 'The Unlikely Genius of Dr Cuthbert Kambazuma' writes about it with compassion, humour, and a kind of underlying rage.

It takes a special calibre of man to slice, peel and consume an over-ripe mango while manoeuvring, with only one knee, the antiquated oversized steering wheel of a battered ZUPCO omnibus hurtling along at breakneck speed. Teddington Chiwafambira was, indeed, just such a man. Untroubled by his motley cargo of seventy or so lunatics, three distracted Mental Health Superintendents and two terrified orphans, he wiggled his portly posterior into position, wedging his lukewarm Coca-Cola between his sweaty thighs. Squinting at the road ahead, he rested his knee against the base of the worn steering wheel. Guided by habit, his hand reached quickly into a tatty plastic packet swinging to and fro like a frenetic pendulum from the window winder. He snatched up the nearest fruit, noting with irritation its small size and a nasty rash of brown speckles. But he had other matters on his mind, far more pressing. His bothered expression contrasted with the image of smiling revellers painted in bright colours on the sides of his omnibus, under the words from a much-loved jingle, 'Chibu-Chibu-Chibuku ... the beer of good cheer! Grabbing his knife from its resting place in the speedometer socket, Teddington sliced off the bottom of his mango. The knife clattered to the floor as he lifted the fruit to his mouth, using his teeth to clasp the skin and peel it back from the fruit. It was a well-practised drill. He took a large bite, grinding his teeth from side to side to break the fruity fibres, sucking furiously to stem the flow of juice that pooled on the grubby red driver's seat before disappearing through a slit into the foam cushion below. In less than a minute, nothing remained but the white pip which he gnawed at pensively for some time, before tossing it from his open window. Teddington was an angry man. A flurry of calculations consumed his thoughts, and his mind churned like a giant adding machine. How could this bag of mangoes cost him twenty thousand dollars today, when last year it had been only two hundred dollars, and the year before that, a mere two dollars? Who could say what next year's price would be? A million dollars, perhaps - maybe a million just for one! 'Bloody ridiculous! Zvinosharnisa!' he muttered. 'Whatever next - a billion-dollar banana?' Had his ZUPCO omnibus driver's salary escalated by a thousand times? Well, had it? Of course not! He had only ten thousand dollars left in his Post Office savings account and, with bread now costing almost four thousand dollars a loaf, it was clear that he would not make it through the remaining two weeks of the month. 'What sort of life is this?' he grumbled, 'Hazvikwane kana kudyiwa nembwa! Not even fit for a dog!' It was a discussion he had had a thousand times with himself, drifting, as always, to an escape - a fantasy where, without warning, he packed it all in and headed south, down to the border town of Beitbridge. [...]

This is an excerpt from the novel: The Unlikely Genius of Dr Cuthbert Kambazuma, by Chris Wadman.

The Unlikely Genius of Dr Cuthbert Kambazuma is a Zimbabwean novel of startling originality.

Do NOT Take This Road to El-Karama. A journey of ups and downs in eight African countries

Do NOT Take This Road to El-Karama is an entertaining account of a road journey from Chris Harvie’s home outside the Kruger National Park to eight African countries.