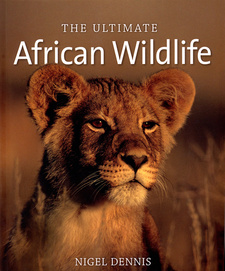 Nigel Dennis has travelled and photographed throughout southern Africa for 23 years. The Ultimate African Wildlife is one of 17 nature books of his.

The vastness of southern Africa - an area of 3.5 million square kilometres and just less than three per cent of the planet's land mass - is of a place largely unspoilt by industrialisation, where humankind shares this space with the animals whose kingdom it has always been. Here you may still see thousands of wildebeest or springbok, watch a lion at its kill, or admire the untiring and single-minded pursuit of the wild dog. And even the landscape, deceptively empty, is an evocation of adventure.Southern Africa is blessed with enormous biodiversity and this is reflected throughout this book. Indeed, it is unlikely that you will ever come closer to seeing - really seeing - the animals of Africa than you will in studying the photographs in this book. It may be argued that specialised technology has made photography easy, but this is only partly true. Technology does not give the photographer his skill, nor does it supply the patience, courage and sound knowledge of his art and of the subjects he sets out to capture. These attributes are more than just virtues, they are essentials - especially to wildlife photography. Nigel Dennis has a rare talent for producing close-up, pin-sharp and vibrant images of African wildlife, and it is this remarkable ability that sets him apart from the common herd. This portfolio is a selection of the very best of his photography taken over a ten-year period on safari throughout southern Africa and Madagascar. The photographer's affection for his subjects, as well as his skill in approaching and recording them are apparent, and his inspiration stems from the fact that these animals and environments form vital links in a chain of life-a chain that is all too often compromised. Conservation and wildlife management should thus seek to preserve land, which, when lost, is all too rarely recovered. Excellent photographs not only help bring to life the threat faced by our natural heritage, but also enables us to see the subject with new eyes and with a little more insight. Through images, we may be able to see something differently, perhaps for the first time, or perhaps in such a way that our relationship to the subject is changed forever. One such example is the island Eden of Madagscar, close to Africa, yet, in so many ways, barely even a close relation. Shown here is not the least of distant relationships among the wildlife - including some creatures that, if ever they occurred on the African continent at all, are now extinct. Africa remains as much of an adventure as it was centuries ago. Only the nature of that adventure has changed. Whereas the continent's wildlife once represented sport which was related to shooting and the bringing home of trophies, today it is rather a seeking out and appreciation of the best that remains. Despite a shrinking environment for its wild creatures, and a burgeoning human population, a great deal of adventure is still to be found in Africa. Indeed, the realisation of the value of ecotourism has led to increasingly enlightened attitudes towards conservation. This is a bookthat revealsto usthe wildlife of Africa as it really is. Wild moments are revealed in the random sequence in which events occurred; events that the photographer was alert enough to record, and this book is many such moments condensed and preserved. If the best of wildlife memories could be gathered and bound, they would look like these. [...]

This is an excerpt from the book: The Ultimate African Wildlife, by Nigel Dennis.

The Ultimate African Wildlife is a portfolio of Nigel Dennis's best work selected from 30 000 images.

Watching Whales & Dolphins in Southern Africa is an invaluable guide for anyone wishing to know more about whales and dolphins of the region.