The Terrible Ones. A complete history of the 32 Battalion, by Piet Nortje 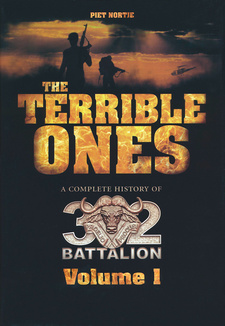 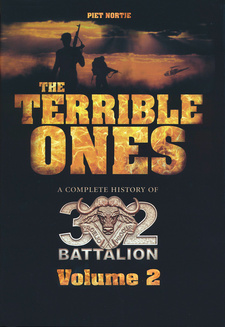 The Terrible Ones, a comprehensive two-volume work on the complete history of the 32 Battalion, covers in detail the unit’s 117 documented military operations from 1976 to 1993. Piet Nortje explains how the operations were planned and executed, what went wrong, what went right, and what the outcomes were.

Soon after the publication of 32 Battalion: The Inside Story of South Africa's Elite Fighting Unit, I started work on The Terrible Ones, primarily to achieve my personal goal of documenting the complete story of 32 Battalion, but also to respond to requests, questions and critiques relating to the earlier publication. Some individuals either did not read the preface to the first publication or did not understand what I had explained. I wrote that I did not receive much support from former 32 Battalion men during my research and had therefore decided to base the work on official documents and my personal experience of nine years' service with the battalion. Great was my disappointment when individuals criticised some events in the publication as being incorrect, inaccurate or untrue without first consulting with me to confirm the source of my information. Greater was my surprise when I showed some of these critics documents, in their own handwriting, which I had used in the work, but still they maintained that these were incorrect. The common response was: 'You know, you were there; we had to tell them what they wanted to hear', thus lying to higher headquarters. During my service with 32 Battalion, I never did this. Why was it necessary for others to do it? And now they were criticising what I had written. Also, what made the first book incomplete was the top-secret classification of the 32 Battalion files. The files that I used in my research at the time that the work was published were still classified top secret. Even though there were three works on 32 Battalion by 2003, not a single document in the Department of Defence Documentation Centre (DoD Doc Centre) was consulted in the research because of their classification. By the time I started the research in 1996,1 was serving in the South African National Defence Force (SANDF), and after much help from Commandant (Lieutenant Colonel) Wally Vrey, a former 32 Battalion officer, and only because I had secret military clearance, I was granted authority by the chief of the SA Army to consult the classified 32 Battalion files. This was allowed only after the files that I'd requested had been scrutinised by Defence Intelligence. I was not allowed access to some of the requested files. However, even though I had all the information from the files, I could not publish, at a rough guess, 60 per cent of the information in those documents because they had not been declassified. Hence my first publication was incomplete. Since then I have managed to obtain all the files, and much more, which are now declassified. The first comment I received was from Des Burman (former 32 Battalion member, 1976-1979), who asked, "When are we going to read what the man in the trench experienced?' - meaning the personal experiences of the 32 Battalion men. Then, after I had made contact with him, a former 32 Battalion commander sent me an email saying, 'You upset many people, not because of what you wrote, but because of what you did not write', meaning that I had not given the complete story. (...)

This is an excerpt from the volumes: The Terrible Ones. A complete history of the 32 Battalion, by Piet Nortje.

The Terrible Ones. A complete history of the 32 Battalion

The Terrible Ones, a comprehensive two-volume history work covers in detail the 32 Battalion's 117 documented military operations from 1976 to 1993.

The Battle of Savate (Operation Tiro-Tiro) was 32 Battalion’s greatest victory since its formation in March 1976.

The story of the Buffalo Soldiers of the 32-Battalion from 1975 to 1993, South Africa's most elite and controversial infantry unit.