The Super-Afrikaners. Inside the Afrikaner Broederbond, by Ivor Wilkins and Hans Strydom. 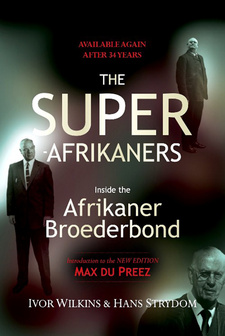 The last 137 pages of Ivor Wilkins' and Hans Strydom's 1978 edition of The Super-Afrikaners were probably the most photocopied pages of any book in South African history. The book was regarded in much the same light as a porn magazine by Broederbonders and their families - it was taboo to be seen to own one, but most were desperate to see what was in it. Those last pages contained the first comprehensive list of members of the highly secretive Afrikaner Broederbond, some 7500 of them. Coming from a rural, Calvinistic, Afrikaner-Nationalist family, I knew better than to ask my father if he was a Broeder. I was one of the many who quickly scanned the last pages of The Super-Afrikaners to see whether my father's name appeared. It didn't. However, not every member's name was on the list and my father was a staunch Nationalist, an elder in the Nederduitse Gerevormeerde (NG) Kerk and a member of Rapportryers - the Broederbond's version of Rotary and Lions - all good credentials for membership. I would have been disappointed had I found out that he had indeed been a member. I had always considered my father to be an honourable, no-nonsense man. In my view as his son, belonging to a secret, elitist and patriarchal clique would have been unbecoming of such a person. Or perhaps that only became my view as a politically aware adult. As a teenager, my friends and I often talked about the Broederbond, wondering whose father was a member. If you had known your father wasn't a member, you would have considered it wise not to mention it because that could only have meant that he hadn't been deemed important or influential enough to be invited to become a member - there was, as Strydom and Wilkins explained in detail, an elaborate procedure prescribed for the proposing of new members. What we discussed more often than not was whether or not the Broeders had a secret handshake - how else would they have known whether or not they were talking to a fellow Broeder? Several of the boys pretended to know and demonstrated weird and wonderful handshake rituals. As it turned out, no secret handshake existed. [...]

List of Illustrations
Introduction to the 2012 Edition by Max du Preez
Original Preface
Profile of Power
Part I: ASCENT TO POWER
History of the Afrikaner Broederbond
Hertzog
Smuts
The Symbolic OxwagonTrek of 1938
Political Triumph- the 1948 Election Victory
Part II: POWER
After the Victory
Republic - A Dream Achieved
Afrikaans-English Relations
A View on the Indian Future
The Broederbond and the Coloured Policy
Division among Brothers - the HNP Split
The Broederbond and Apartheid
Soweto - June 16
Sports Policy
Education
The Struggle for the Churches
The Commission of Inquiry
Part III: THE MECHANICS OF POWER
The Broederbond - As seen by the Broeders
The Constitution, Administration and Finance
Recruitment
Induction
Secrecy
Discipline and Watchdog Committees
Contact between Members and Subsequent Influence on Policy etc
Economic and Other Institutions Formed by the Broederbond
The Ruiterwag
Conclusion
Selected Bibliography
Index
Appendix
Broederbond Membership List

This is an excerpt from the book: The Super-Afrikaners. Inside the Afrikaner Broederbond, by Ivor Wilkins and Hans Strydom.

The Super-Afrikaners. Inside the Afrikaner Broederbond

The Super-Afrikaners, originally published in 1978, scandalised South Africa as it exposed the secret workings of the Afrikaner Broederbond.