The southern African Plectranthus and the Art of Turning Shade to Glade, by Ernst van Jaarsveld 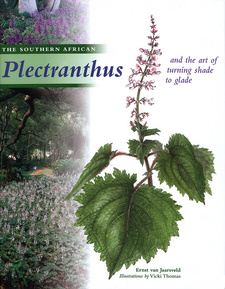 Although it has been realized for a number of years that many of our Plectranthus species would make attractive garden subjects, it is only recently, since Ernst van Jaarsveld, author of The southern African Plectranthus and the Art of Turning Shade to Glade, took an interest in them, that gardeners in general are becoming aware of them.

Displays held at Kirstenbosch during the past few years, organized initially by Ernst van Jaarsveld and later by other members of the Kirstenbosch staff, have demonstrated many species growing to perfection, either in massed shrub plantings or as groundcovers in shady places. In addition, several species were shown to be well suited for growing as ornamental pot plants in hanging baskets. Since his appointment to the staff of the National Botanical Gardens of South Africa, stationed first at Nelspruit from 1974 to 1976 and then at Kirstenbosch, Ernst van Jaarsveld has made a significant contribution to our knowledge of the genus by collecting specimens throughout South Africa. It is obvious that he has an eagle eye for spotting unusual plants and in the process has discovered three new species, one of which I had the pleasure of naming in his honour. His collections have also added greatly to our awareness of the extent to which species can vary, whilst several appear to be interspecific hybrids.The fact that he has regularly collected living material as well has greatly added to the value of his contributions. My own interest in the group goes back over thirty years when I found that it was almost impossible to make a reliable identification of a Plectranthus specimen in the herbarium. This was partly because the plants are difficult to turn into good herbarium specimens, with the result that the early attempts at classification often increased the confusion. Fortunately the original collecting sites of most species are on record, and the ease with which plants can be propagated by cuttings greatly facilitated their study in cultivation. In addition to its horticultural interest, Plectranthus shows a number of fascinating features which are worthy of closer study. The vegetative parts are often characteristically scented, from the rich, pleasant fragrance of P. amboinicus and the citronella-like scent of P. laxijlorus to the strong and rather repellent odour of P. neochilus. As constituted at present, the genus forms a somewhat heterogeneous group of about 300 species whose distribution extends from Africa and Madagascar, where the main concentrations are, to the southern Arabian peninsula and India, with a few outliers in Malesia and Australia. Preliminary cytological studies have revealed that several series exist within the genus, each differing in basic chromosome numbers, and it is possible that the whole group will eventually be subdivided into several genera. However, such a step would be unwise until the numerous tropical African species have been thoroughly sorted out and their affinities with the southern African species established. (L. E. Codd, Botanical Research Institute, Pretoria)

The Plectranthus species in Southern Africa:

This is an excerpt from: The southern African Plectranthus and the Art of Turning Shade to Glade, by Ernst van Jaarsveld.

This major work on the southern African Plectranthus, surveys the discovery and naming of this beautiful plants and includes an account of the author's own travels in search of them.

Waterwise Gardening in South Africa and Namibia is aimed at anyone who wants to create a new garden or convert an existing one to waterwise principles.