The Scourge of the Kaiserbird, by Koos Marais 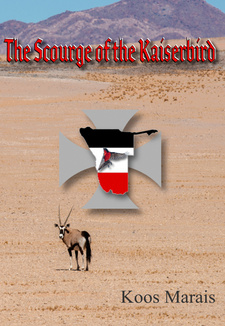 Translated from the original Afrikaans novel "Die Keiservoel oor Namaland", this is The Scourge of the Kaiserbird, by Koos Marais.

The gusts of an icy wind snaking across his back made Ernst Luchtenstein shiver. The fine hairs on his thin forearms stood upright in the last glow of the afternoon sun. With his chin in his hands and his elbows resting on the starboard railings of the Gertrud Woermanns foredeck, Ernsts slight body swayed with the movement of the cumbersome steamship. He was fourteen years of age, with many questions on his young mind. He stared at the strange island in the bay in front of him - the bay known as Luderitzbucht. The island was covered with hundreds of small circular shelters, like a rash on a diseased persons body. Short, slight, copper-coloured figures were crawling into and out of the shelters. Were they real human beings? Now and then the cold wind carried a nauseating stench from the island towards the ship, making the German boy hold his nose in disgust. Surely real people could not smell like that, he thought to himself. And did real people stay in such shelters? Or were these perhaps cages, like the ones in Hamburg's zoo? Ernst let go of his nose and sniffed the air again, hesitated and then inhaled more deeply so that the stench lingered deep in his throat, causing his stomach to churn. It reminded him of the dead rats he always had to remove from the attic in his parents' house and dispose of on the rubbish dump. The steamship carried him, his mother Therese and his six-year-old sister Charlotte to a pioneering life in German South-West Africa. Tomorrow they would occupy this new homeland where his father, Joseph Luchtenstein, had been working as a transportryer for the past three years, and was now awaiting his family's arrival. Questions whirled around in Ernst's mind. Who would he be from tomorrow morning onwards? German? Jew? German South-West Afrikaner? African? He would ask his father, when they saw each other the next day. His glance fell on a shiny patch of oil on the water directly below him. The shaky image of his reflection seemed to mimic his uncertainties and doubts. Questions shrieked and swooped around him like the seagulls among the ships in the bay. It occurred to him that at least these seagulls knew who they were. During the voyage Ernst had mostly lounged around on deck, high above the sea and the beckoning horizon, daydreaming of the adventures that lay ahead. Little Charlotte, minus a couple of teeth, and with her thick blonde hair in braids, was never far away from her mother. She told her rag doll and teddy bear about all the wild animals they would be seeing. For the past four days the ship had been battling against a ferocious south-easter along the coast of German South-West Africa. All Ernst could see on land was sand, sand and more sand. Everywhere the same; beaches bleached white like freshly laundered sheets on a clothes-line. Empty, white, dead. He knew nothing could exist there. Only white sand, nothing else. Once they passed a larger bay with quite a number of docked ships, but the captain steered towards the deep sea because the bay belonged to the English king. That was the only variation in the endless, boring stretches of sandy beach. At last, after an exhausting and monotonous three weeks at sea, they were lying at anchor in the cold, purple-orange dusk of Luderitzbucht. Two dozen other German families were on board the Gertrud Woermann in search of a better life in the colony of the Kaiser. [...]

This is an excerpt from the novel The Scourge of the Kaiserbird, by Koos Marais.

The Scourge of the Kaiserbird

The Scourge of the Kaiserbird is a novel based on the author's perspective of Namibian colonial history.