The Romance of Cape Mountain Passes, by Graham Ross 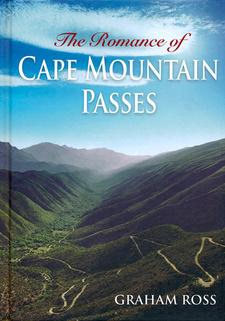 Illustrated throughout with full-colour and sepia photographs and accompanied by helpful maps, this book by pad maker Graham Ross, The Romance of Cape Mountain Passes, is for those with a love of the open road, an interest in history and a delight in the triumphs of engineering, human ingenuity and imagination.

The reasons for writing this book are twofold. Firstly, I feel that there is far too little record of the history of civil engineering works in our country. And as Winston Churchill is alleged to have said, 'the further backward you look, the further forward you can see', such a record should have merit. I decided to see if I could do something about it, seeing that I am now retired and supposedly my own master. So I got stuck in, researching and recording the various sources which are available here. I started on the Cape, as that is where the major portion of my engineering has been done, and I soon realised that I must in fact restrict myself to the Cape: my available time is limited, and the Cape offers sufficient challenge to keep me on my toes. The result is a 400-plus-page production, Mountain passes, roads and transportation in the Cape: A research document. This consists of an index of over 490 Cape passes (reproduced as an appendix to this work), a list of major construction dates, and a chronology recording data extracted from the sources which, in turn, are detailed in an annotated bibliography. The second reason for writing this book is that the flow of data for inclusion in my research document was slowing, and more and more people were harassing me to write something about the mountain passes I had researched. I had compiled, for the South African Institution of Civil Engineering, 18 articles in a series called Reminiscences about Cape mountain passes. These had been published over a period in the Institution s magazine, Civil Engineering, and were then offered as a collection in 1998. They were stories, tales and recollections of specific projects or happenings which I had bullied friends into contributing. I thought that it would be nice to partner this series with another, which would record the histories of various Cape mountain passes, using for this purpose some of the data I had collected in my research document. I opted to tackle the passes (more or less) in the chronological sequence in which they were discovered or pioneered, in the recorded history of our country. The result would be that the coverage would gradually spread out from Cape Town, following the development of (road) mountain passes as the colonial settlement pushed its way into the interior. This appeared to me to offer a logical progression for the chapters. The history of each pass, as its turn came, would be followed from that early date through to the present time in one chapter - the narrative would not jump from pass to pass so as to keep a chronological sequence of events. As far as coverage is concerned, it was obvious that only some of the 490-odd passes could be included, but what was not so easy to decide was what to cover about these passes. First of all, the book is a record of the various stages in the histories of the passes about which I have written. Next, I had decided at the outset that this was not to be theoretical, or scientific, or even very professionally an engineering book. (...)

This is an excerpt from the guide: The Romance of Cape Mountain Passes, by Graham Ross.

The Romance of Cape Mountain Passes

The Romance of Cape Mountain Passes tells the story of about 50 of the best known or most significant passes.

Decorated with African wild flowers, the Kirstenbosch Journal is designed as a gardening journal.