The Roadside Geology of Namibia, by Gaby Schneider et al. 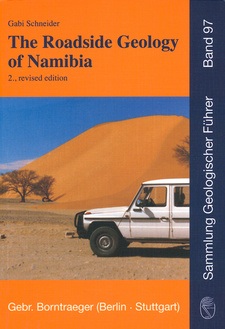 This Roadside Geology of Namibia (Dr. Gaby Schneider et al.) has been prepared in response to a growing demand for geological information. The idea for a guide was conceived by members of the Geological Survey of Namibia.

The first part of this route follows road B1 from Windhoek to Okahandja. The area between these two towns belongs to the Southern Zone of the Damara Orogen and is underlain entirely by schist of the Kuiseb Formation (Figs 9.1.1, 9.1.2). This Southern Zone developed from an intra-continental rift into a narrow ocean, where the widespread greywacke succession of the Kuiseb Formation, now metamorphosed into schist, was deposited. The schist forms a highly thrusted, kyanite-bearing, high-pressure, low-temperature belt with a southward vergence (Miller 1983,1990). The road follows the Windhoek Graben, which is part of a prominent fault system of Mid-Tertiary age developed as a result of extensional tectonics. Such extensional tectonics have occurred in the Earth's crust in southern Africa since the Early Cretaceous some 130 Ma ago, heralding the break-up of Gondwanaland. Activities on these faults are still, albeit to a minor extent, indicative of extensional tectonics continuing as the continents drift further apart. The Windhoek Graben is about 70 km long and 20 km wide. To accommodate crustal stress, individual blocks were displaced vertically in relation to each other, along steeply dipping faults, with only minor horizontal movement. Schist forms the prominent mountain range to the E of the road, and also the hills in the W, and for about 30 km they can be seen in numerous outcrops close to the road and in road cuttings, but thereafter the Windhoek Graben widens to the N, and outcrops become rare. Also of interest are Cenozoic dunes, which have developed on the floor of the Windhoek Graben, and can be seen in road cuts about 50 km from Windhoek. Before Okahandja is reached, two bridges cross the Swakop River, one of Namibia's major ephemeral rivers, and its tributary, the Okahandja River. The waters of he Swakop River are collected upstream in the von Bach Dam, a major source of water for Windhoek, and the river therefore only floods after exceptional rains in the catchment area downstream from the dam. Between the rivers, on the southern outskirts of he town, outcrops of quartzose and pelitic mica schist of the Kuiseb Formation intruded by pegmatites occur next to the eastern side of the road. Porphyroblastic cordierite up to 2 cm long is present in the pelitic layers. It is interesting to note, though not readily recognized, that just S of Okahandja the Okahandja Lineament, one of the most important boundaries in the Damara Oroge is crossed. It separates the Central Zone of the Damara Orogen from the Southern Zone and marks major changes in stratigraphic succession, structural style and age of tectonic events. The lineament trends NE and represents a deep penetrating zone of weakness in the crust which has repeatedly been active and has had a major influence throughout the depositional and tectonic history of the Damara Orogen (Miller 1979). The Central Zone is underlain by the low-pressure, high-temperature counterpart of the kyanite belt of the Southern Zone. Arenitic and calc-silicate rocks prevail in the basal Nosib Group which formed in graben structures during intra-continental rifting. Diverse rocks of the overlying Swakop Group were deposited in a spreading ocean on a continental shelf and are subdivided into the Rössing, Chuos, Arandis, Karibib, Tinkas and Kuiseb Formations (see 3.). [...]

This is an excerpt from the book: The Roadside Geology of Namibia, by Gaby Schneider et al.

Namib. The Archeology of an African Desert

Namib: The Archeology of an African Desert is a story of human survival over the last one million years in one of the most hostile environments on Earth.

This study, focussing on the pastoral nomads of the Central Namib Desert, presents a new and challenging approach to the precolonial history of Namibia.

Treasures of the Diamond Coast. A Century of Diamond Mining in Namibia

Treasures of the Diamond Coast is a most complete and up-to-date book on the diamond mining history of Namibia.

Passage through Time. The Fossils of Namibia

Fossils and palaeontological research in Namibia