The Rain Goddess, by Peter Stiff 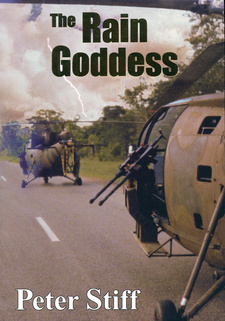 Peter Stiff's war novel, The Rain Goddess, is introduced when the British South Africa Police, later joined by the Rhodesian Army and supported by the Air Force, struggle against communist backed guerrillas who use violence and torture to intimidate tribesmen to follow their cause. They depend in the uncanny predictions of their tribal spirit medium who communes with the spirit of the rain goddess.

The bushveld on the high escarpment above the Zambezi River Valley was parched and dry in the summer of 1965. It was inhospitable country at the best of times, but before the rains the intense heat reflecting off the rugged ironstone and grey granite kopjes made life miserable for man and beast alike. The spruits and streams that fed the great river were ribbons of dry sand that meandered like long smooth roads through the scorched grass and bush. A grey Land-Rover with blue inscriptions announcing it to be a vehicle of the District Police, bumped through potholes along the bush road. The heavy-treaded tyres crunched on the gravelled surface and spat out rough fragments of banded ironstone and clear white quartz onto the long, dust-stained grass on the verges. Sometimes along the straights the speed was as high as 50 kilometres per hour, but for most of the time the vehicle merely crawled as the driver manoeuvred it around tight corners between rocky kopjes and through dry stream beds. The rain should come soon', grunted Saul Jenkins, casting a glance through the open side window at the cloudless blue sky. Tt is true, Nkosi, agreed his black companion. 'By month's end the rains will be here.' These bloody flies get me down', said Saul, swatting the squat green maggot fly that had settled on his hairy sun-tanned arm that rested on the window ledge. They seem to like the blood of whites better than the blood of blacks', chuckled Ndhlela with a touch of the spontaneous humour that was never far from the surface in his race. Saul grinned back. T don't know why. I suppose it's because there's so many more blacks than whites. I guess they treat my blood as a luxury.' Sergeant Ndhlela settled back in his seat. He liked Inspector Saul Jenkins, for he was a man he could understand, which was not always the case with the white man. He glanced sideways and studied him for the umpteenth time through half-closed eyes — it would not have been polite by custom to openly stare. His eyes took in the sweat-stained open-necked grey police shirt, which covered powerful shoulders tapered down to a spit-and-polished broad leather Sam Browne belt over the waist of his khaki shorts. Controlling the foot pedals were two muscular, hairy legs which, he knew well from experience, were capable of walking across kilometres of bushland in long loping paces that never seemed to tire their owner. He had a strong face, thought Ndhlela approvingly. He had stern blue eyes set in strong sun-tanned features. Those were topped by a crop of blond hair that barely showed beneath his cap. He had a compelling personality. To the criminal elements among the tribesmen of Senga, he was a very dangerous man indeed. When he looked at a guilty man it was said that he possessed the power to see right into his soul. Yes, indeed, sighed Ndhlela silently to himself. It was good indeed to serve such a man for the last year of his 35 years' service before he retired. This strange, strong, yet sometimes extrovertly happy young, but old man, of 26 summers, held the position of Inspector-in-Charge of Senga Police. He was responsible for law and order there and in the thousand square kilometres of tribal lands, farms and virgin bush that stretched southwards from the great Zambezi River. [...]

This is an excerpt from The Rain Goddess, by Peter Stiff.