The Penguins of Boulders, False Bay-South Africa, by Dirk Schmidt 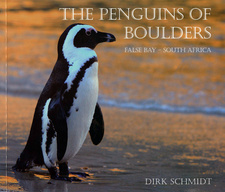 Dr. Dirk Schmidt is an expert naturalist and conservationist. The Penguins of Boulders, False Bay-South Africa is his third book on coastal wildlife.

The African penguin is listed in the Red Data book as a vulnerable species. It is the only penguin species known to breed the African continent. According to the South African National Parks (SANParks), the African penguin population was estimated to be approxima 1,5 million in 1910, however by the 20th Century, less than 10% of the former population remains. The uncontrolled harvesting of penguin eggs as a source of protein, as well as the market for guano (bird droppings) as a commercial sourc of fertilizer, nearly drove the species to extinction. From just two breeding pairs in 1982, the Boulders penguin colony has now grown to about 3000 in recent years. This is partly due to the reduction in commercial pelagic trawling in False Bay, which has allowed an increase and recovery in the resident stocks of pilchards, squid and anchovies, which form a vital part of the penguin's primary diet. Despite the success at the Boulders colony, the species remains extremely vulnerable with the overall population remainir under pressure and in decline. Nestled in a wind sheltered cove between Simons Town and Cape Point, lies the idyllic and tranquil area of Boulders. Boulders has become world famous for its thriving colony of African penguins. Falling under the protection of the Table Mountain National Park (TMNP), which also incorporates Table Mountain and the Peninsula mountain chain from Signal Hill to Cape Point, this area remains naturally pristine. Although set amongst a residential area, it represents one of the few sites where this vulnerable bird species can be observed in close proximity, wandering freely in a protected natural environment. Bordered mainly by indigenous bush on the one side, and the normally crystal clear waters of False Bay on the other, the area comprises of small sheltered bays, partially enclosed by massive granite boulders, said to be more than 540 million years old (SANParks). The main penguin viewing area is Foxy beach which forms the main part of the breeding colony. Due to the sensitivity of the area, access to the beach is limited to wooden walkways. There are two other beaches in the Boulders area, namely Waters Edge and Boulders beach, these are situated further south. Visitors are allowed onto Boulders beach, and although access is strictly controlled by the TMNP, visitors can literally swim with the penguins - however beware, they have sharp beaks and will not hesitate to bite when threatened! (...)

This is an excerpt from the book: The Penguins of Boulders, False Bay-South Africa, by Dirk Schmidt.

The Penguins of Boulders is a charming illustration into the lives of one of the most adorable and charismatic creatures in False Bay, South Africa.

Illustrated throughout with magnificent images of White sharks, this book is essential reading for anyone who is concerned about understanding White Sharks behaviour.

Geology off the beaten track introduces geological sites and treasures beyond the major routes across South Africa.

The Commemorative Editon of Newman's Birds of Southern Africa is a high standard bird guide with indexes in scientific, English and Afrikaans bird names.