The New Game Rancher, by Pamela Oberem and Peter Oberem 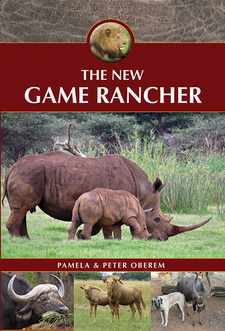 Having over the past decade seen the contribution of Pamela Oberem and Peter Oberem to bringing science and experience to the pet owners, farmers and vets in their many informative and useful books one can be sure that game ranchers will appreciate this new book, The New Game Rancher.

Introduction to The New Game Rancher

Game ranching has attracted the attention of analysts and commentators because of its huge success and contribution to the economy. In summary its success can be attributed to a number of factors including the fact that game animal species can effectively and profitably utilise the marginal agricultural land on which livestock farmers struggle to make a living. South Africa is, generally speaking, poorly endowed with the natural resources needed to make it competitive in terms of efficient and competitive agricultural production, due to low and erratic precipitation, high evaporation, shallow and poor soils. Eighty percent of the 100 million hectares of South African agricultural land is classified as marginal agricultural land and is only utilisable as rangeland for the grazing of ruminants. South Africa's indigenous animal species have (unlike domesticated livestock) evolved over millions of years in this harsh environment and are better adapted to utilise even poor quality pasture, shrubs and trees, to cope with lack of water, and to resist indigenous diseases, parasites and poisonous plants more effectively. Natural vegetation or rangelands are therefore adapted to sustainable utilisation by indigenous animals which are also less likely to cause degradation than domestic stock. It is important to note that the 20 million ha currently occupied by game ranches are not established on pristine conservation areas or arable agricultural land but are marginal lands which were degraded by agriculture (overgrazing, ploughing and erosion). Wildlife ranching has therefore expanded the range of game animal species as well as preserving all the species of animals and plants whose survival is promoted by preserving natural vegetation. The activities of wildlife ranching still, however, provide food in the form of game meat, and employment for farm workers while contributing to biodiversity and ecotourism. Wildlife ranching only came to its own as a form of agricultural business, as opposed to a small portion of the tourism business, with the proclamation of the Game Theft Act, Act 105 of 1991 in that year. With this confirmation of the ownership of game within specified fences and on permitted (exempted) properties, business principles began to apply to game animals: They became an asset, and in the case of rare species and/or rare colour variants sometimes very valuable assets. This was the spark that ignited the benefits of sustainable utilisation of wildlife and thus wildlife ranching as part of the Green Economy of South Africa. The subsequent growth was, initially, based on an increase in the number of game ranches and the need to stock them with the common plains game. Income and profits were derived mainly from supplying the increasing number of wildlife ranches with game animals for consumptive use: Hunting, both local for meat (biltongs-hunting) and for trophies, the latter by mainly foreign hunters, non-consumptive use for ecotourism. From the early 2000s, further impetus to the growth and profitability of wildlife ranching was added by the breeding of higher value-rare species and/or colour and morphological variants. The full potential of game meat production, beneficiation and export has yet to be realised and is the focus for the 3rd phase of the growth in the wildlife ranching industry. [...]

This is an excerpt from The New Game Rancher, by Pamela Oberem and Peter Oberem.

The New Game Rancher is ideal for anyone with an interest in game farming in Southern Africa.