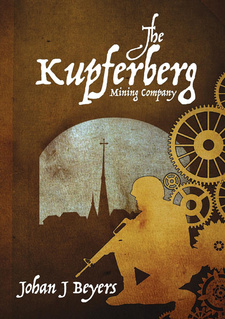 Jacob Beyers crime and power story about the Kupferberg Mining Company is fiction interwoven with facts, rumours and legends.

They were all there, the original command-structure of Combat Group 5. They were there because they were connected by an ideal. All of them had received the primary part of their schooling and military training in the former Soviet Union and had served in different positions in the government service. All but one. The convener of today's meeting had a totally different background. After a daring escape from prison at the age of eighteen, where he served time for armed robbery, murder and rape, he had sneaked his way through the net of South African border patrols and crossed into Angola. He had travelled in a northerly direction, surviving on what little he could find to eat in the war-ravished country, while constantly trying to evade different groups of trigger-happy fighting factions. Sometimes he travelled by day, but mostly by night. On three different occasions he had to kill another human in order to remain unreported. Eventually, after countless days of travel, he managed to cross another border. Totally exhausted and almost at the end of his strength, he stumbled into a camp of Chinese military advisors. For almost a year they made him work like a slave before someone noticed he had potential. By this time he was fluent in Chinese as well as the local dialect. For the next three years he was fed on political doctrine and received training in guerrilla warfare in China, the Maoist way. An additional two years of practical combat training were spent in Vietnam and another year in East Germany. It was while he was in East Germany that he became involved in the politics of his country of birth and in the process he found favour with the exiled opposition party leaders. He requested to return home as second-in-command of Combat Group 5. Once he arrived, he became actively involved in the liberation struggle. His ruthlessness against the enemy and his bravery under fire made him popular amongst his fellow combatants. He personally led three of the most successful cross-border infiltrations into South African held territory with a minimal loss of men on his side, but with painful blows to the enemy. During the second raid, he earned himself the nickname, 'the Butcher'. It was rumoured that he had personally hacked the pregnant wife of a settler farmer to pieces with a machete. In terms of his short-term personal aspirations at that time, the Butcher had one more hurdle to cross - his commanding officer, one of the original party members. He was a much more moderate and less ambitious kind of fellow who preferred to delegate responsibilities. In this way he kept himself out of the firing line and in the beds of the young female recruits, who arrived from across the border, either willingly or unwillingly. The Butcher started to gather bits and pieces of information which he carefully fabricated into evidence. A purging campaign inside party ranks provided an ideal opportunity. After the massacre at Cassinga the party leaders were looking for scapegoats. He accused his former commanding officer of collaborating with the enemy, and with enough false evidence to sink a ship, he thus paved his way into the position he sought. The war ended and independence was won. Despite his leadership capabilities and successes on the battlefield, he was not considered for any of the key positions in the new national army and was appointed as second-in-command of the Grootfontcin Military Base. He regarded this as a most humiliating consolation prize. He had much higher military and ultimately, political aspirations. As a military leader, he was highly regarded, respected and generally feared by those under his command. But he trusted only a few. And those few were gathered with him in a classroom on the outskirts of the small village, Elangeni.  [...]

This is an excerpt from the novel: The Kupferberg Mining Company, by Jacob Beyers.

The content of the novel The Kupferberg Mining Company is fictious, interwoven with facts, rumours and legends.