The Kings of Swing. Behind the scenes with South Africa's golfing greats, by Craig Urquhart. 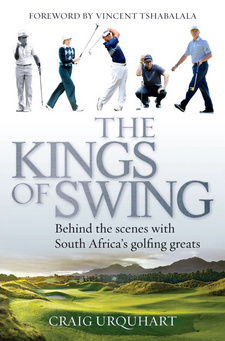 The Kings of Swing: Behind the scenes with South Africa's golfing greats, by Craig Urquhart is a story of the power of the mind and the power of the body in this, the most fickle of all sports.

When Gary Player, Arnold Palmer and Dow Finsterwald were all square coming off the 18th green at the 1962 Masters, the young South African had to dig deep - very deep - just to be able to show up for the play-off the following day. With shafts of soft light streaming through the Georgia pines, the contest was proving to be as dramatic as the setting. But it was also proving to be too much for the foreigner, who found sanctuary back in his room. Sleep did not come easily that night, and he experienced some kind of mental block about the decider. "I just didn't want to go," he later recalled. His friend, George Blumberg, was tasked with transporting him from their rented house through the traffic and huge crowds to 2604 Washington Road and down Magnolia Lane - flanked on either side by those majestic 60 magnolia trees - which lead to the clubhouse. Player felt the sweat roll down his forehead and his hands were trembling as he waded through the crowds. He only had time to hit a few long irons at the driving range and a few putts on the dewy practice green before being ushered to the first tee and his date with destiny. On both sides of the fairway, from tee to green, were thousands of excited supporters, the majority members of the famous "Amies Army". But, with or without the crowds, no sport is as solitary as this one. In his book Down the Fairway, Bobby Jones (one of the founders of Augusta) noted that, in golf, "the player is all alone with his God". And American golfer Hale Irwin observed that this is the most isolated sport of them all: "You're completely alone with every conceivable opportunity to defeat yourself. Golf brings out your assets and liabilities as a person. The longer you play, the more certain you are that a man's performance is the outward manifestation of who, in his heart, he really thinks he is." Seven-time Major winner Sam Snead once noted: "Of all the hazards, fear is the worst." The deeply religious Player used his ball to press the tee into the ground, stepped back and peered down the aisle of the cathedral, flanked by the giant pines. This was his world. And then there was silence; pure and perfect silence. In the moments that followed, he was overcome with that sense of calm that true champions experience when they are in the zone. In golf, it's the moment when the athlete's entire world is focused on a 45.9-gram, dimpled ball that will reflect - in its speed, rhythm, trajectory and distance — his or her very being at that moment. The South African had learnt at an early age that pure talent can only take one so far and that the mind must take over and lead the body into that realm of perfection. And years of mental training, meditation and self-hypnosis had taught him that the mind can be trained to uphold the nerves. That spiritual awakening on the course would leave the young man drenched in adrenalin and sharply focused. Golf historian Pat Ruddy once observed that just as the breeze fits itself to the shape of the sea and the shape of the land, a golfer's mind must fit into the land shapes, flow with the winds and rejoice in the craggy mental terrain that lies between the first and 18th green and, yes, between games throughout life. [...]

This is an excerpt from the book: The Kings of Swing. Behind the scenes with South Africa's golfing greats, by Craig Urquhart.