The Inevitable Pipeline into Exile. Botswana’s Role in the Namibian Liberation Struggle, by Johann Alexander Müller 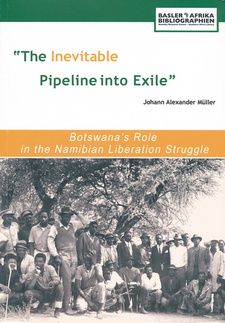 Johann Alexander Müller book The Inevitable Pipeline into Exile: Botswana’s Role in the Namibian Liberation Struggle will serve as a valuable source of new information for many and preserve the precious memories that present and former activists shared with him.

Beyond the Confines of the Nation:
Another Dimension of Liberation Politics in Southern Africa

This book forms an important departure in the study of liberation movements in Southern Africa. African independence and liberation movements have customarily been viewed within a national framework. Previously, while the exile of leaders and liberation fighters as well as international diplomacy is certainly documented, little attention has been given to the broader regional setting of the mobilisation and movement of people. Safe havens in neighbouring countries played a vital role in the success of guerrilla strategies. Little attention has previously been paid to the preconditions of such co-operation and the efforts in organisational work that are a prerequisite for making it effective. Johann Müllers account, originally submitted as a PhD thesis in 2009, represents an important and, in some ways, a pioneering inroad into precisely this field. Müllers study can be read as a contribution towards the relationship of two nation states during their formative periods, despite their grossly divergent trajectories. His description conveys some of the foundations of regional co-operation that today are incorporated into the SADC. As one of Müller's informants puts it, SADC was already, avant la lettre, embodied in a figure such as Daniel Munamava, one of the main actors in Müller's account, along with many other prominent Namibians, which include the first and second presidents of independent Namibia. All made their way through the vast and sparsely populated regions of Botswana, adjacent to the Namibian territory towards the East, to reach independent African countries where they could establish themselves in order to wage the liberation struggle from outside their home country. Müller describes the inevitable subterfuge Namibians entering Botswana employed, e.g. contracting as migrant workers in order to leave the country on a legal pretext. Above all, his story tells of the help and co-operation that Namibians going into exile received outside the country. Herero speakers residing in various parts of Botswana, in particular, extended this help. They were the descendants of refugees from the genocidal campaign of the German colonial Schutztruppe in Namibia at the beginning of the 20th century. Significantly, they welcomed the refugees as fellow Namibians regardless of ethnic background and helped them on. At the same time, they felt allegiance to the country of their birth and residence, Botswana. Some of those supporting the refugees played important political roles in Namibia, especially after independence. A further source of support came from Batswana chiefs, in particular the Ngwato. They had received Herero refugees in 1904 and were instrumental in helping to forestall the incorporation of Namibia into South Africa. This, however, related as well to the contradictory position of the colonial administration of Bechuanaland and, subsequently, the government of independent Botswana. Another of Müller's achievements is that he is able to demonstrate the way in which the incumbent authorities, both during colonial times and after independence, negotiated the difficult task of being virtually surrounded by territories under colonial and apartheid regimes. To some extent they were forced to appease their overwhelmingly powerful neighbour in the south, whilst maintaining a humanitarian and supportive attitude towards the refugees from occupied Namibia. This manipulation of the international system' demonstrates how the dominant realistic view of international relations based on a rather narrow notion of the national interest is countered by a principled, if flexible, stand. Müller's analysis offers a further important perspective on the Namibian liberation struggle. In covering events during the early 1960s, the book deals with the formative phase of the liberation movement. Organisations had not yet crystallised and allegiances were still fairly malleable. It was not quite as clear as may appear in retrospect that SWAPO would emerge as the dominant organisation. At the same time the ways in which this came about underline the importance of the demands set by the OAU for recognition as a bona fide liberation organisation. These demands emphasized the need to engage in armed struggle. While their determination, as well as capacity, was clearly instrumental for SWAPO s ascendancy, the failure to comply with and the thwarted attempts to make up for this deficiency were decisive in the ultimate plight of groups such as SWANU or NUDO, whose members found themselves stranded in Botswana, unable to proceed further as they had hoped, and were expected to do, by Botswana authorities. Johann Müller's research focuses on these little-known developments. He has covered a sizable amount of archival material and interviewed scores of actors both in Botswana and Namibia. [...]

This is an excerpt from the book: The Inevitable Pipeline into Exile. Botswana’s Role in the Namibian Liberation Struggle, by Johann Alexander Müller.

The Inevitable Pipeline into Exile. Botswana’s Role in the Namibian Liberation Struggle

The Inevitable Pipeline is a study on the role Botswana played in the Namibian Liberation Struggle.

At the Edge of the Kalahari. Historical Colour Photographs of Tswana Chiefdoms and Hereros in Exile

Historical Colour Photographs of Tswana Chiefdoms and Hereros in Exile

The Politics of a South African Frontier: The Griqua, the Sotho-Tswana and the Missionaries, 1780–1840

The influential study 'The Politics of a South African Frontier' analyses the relationship between the Griqua, the Sotho-Tswana and the Missionaries in the time of 1780–1840.