The Hidden Thread. Russia and South Africa in the Soviet Era, by Irina Filatova and Apollon Davidson 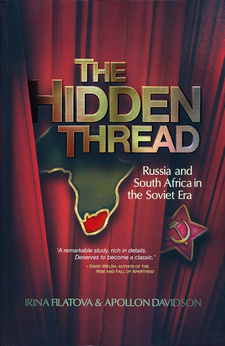 Irina Filatova and Apollon Davidson have studied relations between South Africa and Russia in the Soviet Erafor decades and published a number of books' and numerous articles on this subject both in Russian and in English. But this is the first complete history of ties between the two countries in the Soviet era: from the Russian 1917 revolution to the collapse of the Soviet Union. They give sketches of the 'prehistory' of this era and of its aftermath too, but in terms of Russia's impact on South Africa's historical path, it is the Soviet era that is of salient importance. That is the subject of this book.

Why South Africa - and Russia?

South Africa has long fascinated historians and sociologists because its unique mixture of races, religions and traditions produced and reproduced unique social formations and deformations against the backdrop of the world's greatest concentration of mineral wealth. It has been a virtual laboratory of the social sciences. Only South Africa's internal social dynamics could create its surprising political history. Yet this is also a society which has always been wide open to external influences. In different ways they have played upon its complex interior structure. And that is what this book is about. For the last three and a half centuries South Africa's history has not only been deeply affected by different external influences, but to a large extent it was actually formed by them. Some, like the Dutch and British, were obvious and enormous, for they created the core carrying structures of the country and much more beyond. Some influences, like that of the 'Malay' in the Cape or the Indian in Natal, were more subtle and mainly cultural, contributing to the unique texture of South African society. One could think of many other such influences - Portuguese, French, Jewish and German, to name merely the most obvious. And all this in a pre-globalised world when, on the face of things, events at the southern tip of Africa moved according only to their own momentum. In this connection Russia seldom comes to mind. Some might remember Russian Jewish immigration at the turn of the twentieth century, when no fewer than 25 000 Jews arrived in South Africa from the Russian Empire. Others, mostly veterans of the ruling African National Congress (ANC). I would speak with gratitude of Soviet assistance for their armed struggle against the apartheid regime. And that would be it. Yet the truth is that in the twentieth century Russia, or rather the Soviet Union, left a deep and lasting impact on the trajectory of South Africa's history. Soviet ideology still defines the spirit and letter of the main policy documents of the ANC and its allies, the South African Communist Party (SACP) and the Congress of South African Trade Unions (Cosatu). The Soviet mentality, values and vision of the world are still widely spread among the ANC leadership. Were it not for Soviet assistance to the ANC in exile, particularly in its first and most difficult decade, the ANC might not have survived at all. Were it not for Soviet assistance to the ANC's military-wing, Umkhonto we Sizwe, the history and character of the ANC would have been very different from what it became - and that means that South Africa's recent history as a whole would have been different too. When ideologists of the apartheid regime spoke of the Soviet 'total onslaught' against South Africa, this smacked of paranoia: they found the influence of the 'reds' under the bed and everywhere else. Yet without the Soviet stand in the United Nations, without its anti-apartheid propaganda campaigns and without its support for and assistance to the international anti-apartheid movement, apartheid's demise might have come in a different shape and form. And without the changes in Soviet policy under Gorbachev the 'South African miracle' - the negotiated settlement might not have happened. This book is about all that - and much more. How did Soviet ideals make their way to South Africa? What were these ideals? How was the connection established? Who were the people and what were the organisations involved in maintaining relations between the Soviets and the ANC? What exactly did Soviet assistance to the ANC consist of? How was it delivered? What did the South Africans who came to the USSR for training, whether in the 1930s or in the 1980s, study? How many of these trainees were there? Some names of Soviet spies in South Africa are well known, but were there many others? What were they interested in? And what about South African spies in the Soviet Union? South Africans and Russians fought together against Hitler what were their attitudes to one another during the Second World War? And what did they think of one another during the only time when they clashed on the battlefield - in Angola? How did the change in the Soviet policy under Gorbachev happen, and what was the ANC's reaction to that? How were relations between Gorbachev's USSR and South Africa established? Unlil recently there were no answers to many of these questions. (...)

This is an excerpt from the book: The Hidden Thread. Russia and South Africa in the Soviet Era, by Irina Filatova and Apollon Davidson.

The Hidden Thread. Russia and South Africa in the Soviet Era

The Hidden Thread investigates the relatitonship between Russia and South Africa in the Soviet Era.

Crossing the borders of power: The memoirs of Colin Eglin

In Crossing the Borders of Power, his memoirs, Colin Eglin recalls an active life as a politician in South Africa.

On the contrary: Leading the opposition in the new South Africa

In his memoirs On the contrary, tony leon describes his role while leading the opposition in the new South Africa.