The Griekwastad Murders, by Jacques Steenkamp 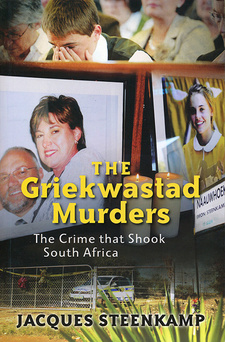 On 6 April 2012, the whole of South Africa became aware of the existence of Griekwastad by a shocking killing on a nearby farm. South African journalist Jacques Steenkamp covered the Griekwastad murders from the beginning and investigated and exposed the truth behind this case.

It all started when a fifteen-year-old boy named Don Steenkamp sped into town in his father's white Isuzu double-cab and screeched to a halt in front of the town's nearly deserted police station. It was shortly before 19hoo when Don jumped out of the vehicle, dressed in black rugby shorts and a T-shirt, and ran into the station's charge office covered in blood. As soon as he entered the one-storey building, where two police officers were holding the fort, the boy fell to his knees and screamed: "You must come! They've been shot. They are all dead." Warrant officers Anthony Wildt and Klaas Rooy, who were standing behind the long wooden counter in the station's charge office, didn't expect anything like this to happen during what was usually a quiet shift. It was a gruesome sight. The boy's hands and face were covered in blood. What made it even worse was that Don was known to them, as was his family. Confronted by the possibility of three brutal murders, the officers were momentarily frozen in shock. They tried to absorb what Don, who seemed unable to stand still, was shouting at them. On the brink of manhood, the obviously traumatised boy still wore braces on his teeth and had short brown hair. Warrant Officer Rooy guided Don out of the charge office through a door on the right, which led to the office of the station commander, but he then turned left and took the child to the back of the building instead. They would have more privacy there, in the courtyard between the police station and the holding cells. Gently, Rooy asked the boy to explain what had happened, and Don stammered that only minutes before he had found both his parents and younger sister shot and killed in their family home. He told Rooy that he had gone to the barn while they were watching television. Shortly thereafter, he heard gunshots. He had then hid for some time. It took a moment for a shocked Rooy to comprehend that people he knew and respected had been murdered in their sleepy community. He, like his colleagues, was accustomed to stock thefts, the odd drunkard causing trouble and knife stabbings, but the concept of a farm murder was foreign to him. Wildt, who overheard most of what was said, tried to remember whether anything similar had occurred in the fifteen years he had been stationed at the Griekwastad Police Station. Nothing even close came to mind. As if suddenly galvanised into action, Wildt got on the phone and alerted almost every cop in the province, chief among them the head of the local detective branch and the duty general for the Northern Cape, based in the province's capital, Kimberley, some 150 kilometres to the east. Although the Northern Cape is South Africa's largest province, it is also the least densely populated, and farm murders occur less frequently here than in other parts of the country. The commotion at the police station soon drew the attention of Henriette Truter, a middle-aged woman who had fallen on hard times in the Western Cape and had been offered a lifeline in Griekwastad, where she ran the local restaurant and guesthouse. Truter, her grey hair cut very short, was enjoying a cigarette and a cup of coffee across the highway when she saw a boy pull up in a bakkie and run into the police station. Standing on the porch of Proviand restaurant, the only place for more than a hundred kilometres in any direction that serves quality food, Truter immediately sensed that something was terribly wrong. [...]

This is an excerpt from the report: The Griekwastad Murders, by Jacques Steenkamp.

This is a full account on the Griekwastad Murders, which occurred on 6 April 2012, on the Naauwhoek farm in the Northern Cape, South Africa.

The report Missing & Murdered, a personal adventure in Forensic Anthropologie, is a facinating introduction to old, and not so old, bones.