The Great Rift Valley of East Africa, by Anup Shah and Manoj Shah 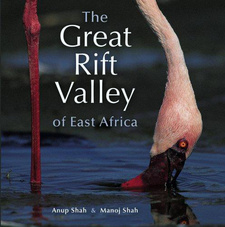 Wildlife photographers and authors of The Great Rift Valley of East Africa, Anup Shah and Manoj Shah, were born in Kenya, East Africa, where they could watch wild animals in their natural environment in the nearby Nairobi National Park. Their photographs have featured in exhibitions across Europe and America, and in many prestigious publications, including BBC Wildlife and National Geographic.

The Great Rift Valley of Africa, formed by violent geological events of the past, is so prominent a cleft down the eastern side of the continent that it can be seen even from the moon. In a pictorial journey across the length and breadth of the East African section of the Great Rift Valley, award-winning wildlife photographers Anup and Manoj Shah explore the diversity of habitats created by this great fissure in the Earth. A series of beautiful photographs reveals the valley’s many ecological niches – evolutionary ‘hotspots’ where diverse life forms have arisen and flourished. The book showcases the fauna of the region. The text and images reveal traces of our own human origins in the rich palaeontological discoveries of hominid remains, and celebrate the way of life of the Hadzabe people of Lake Eyasi. The authors sound a warning note on the potential impact of humans on these formerly pristine areas and the extraordinary legacy of natural diversity that could be lost. The vast and awe-inspiring landscapes of the Great Rift Valley are the backdrop to this fascinating exploration of the ‘cradle of life’.

From the foreword to The Great Rift Valley of East Africa (Anup and Manoj Shah):

When we were little boys in shorts, our parents would drive us 40 kilometres from Nairobi, right up to the eastern wall of the Great Rift Valley, and stop at a place popularly known as 'The Escarpment'. Here, we would noisily tumble out of the car and then gaze, spellbound, at the valley floor below, the forbidding Longonot Volcano, and Lake Naivasha shimmering in the distant heat. On a clear day, we could also make out the western wall of the rift valley and Suswa Volcano. The mysterious and hypnotic scene, reminiscent of the Pleistocene era, inspired in us flights of vivid imagination. What secrets were locked in this seemingly lost world? As children with more imagination than knowledge, we gravely underestimated the treasures locked in the great valley. Armed only with local knowledge, we had no conception of the size, scale and scope of this great fissure in the Earth. We failed to appreciate the diversity of habitats and the variety of life forms contained in these vast landscapes. Little did we realise that this wild and pristine place was the site of our human origins. Much wiser now, we hope this book does belated justice to the awe-inspiring wonder of the Great Rift Valley. When Neil Armstrong landed on the moon and looked back at the spherical Earth, the terrestrial feature that he most easily recognised was the Great Rift Valley of Africa. A relatively new continental rift, this valley stretches in a sequence of subsidences for some 6 400 kilometres (4 000 miles), from Lebanon in the north to Mozambique in the south. The rifting process began about 40 million years ago when the crust and lithosphere of the tectonic plate here were thinned and stretched by powerful convection currents in the underlying mantle, which rose up to form an elevated tract. Major faulting in the crust's rocks, thought to have occurred 11 million years ago, produced a rift or fault line. As the areas to either side of the fault line moved away, the land between its walls dropped down to form a vast valley, characterised by numerous lake basins, volcanoes and escarpments. [...]

This is an excerpt from: The Great Rift Valley of East Africa, by Anup Shah and Manoj Shah.

A pictorial journey across the length and breadth of the East African section of the Great Rift Valley.