The Grand Scam, by Rob Rose 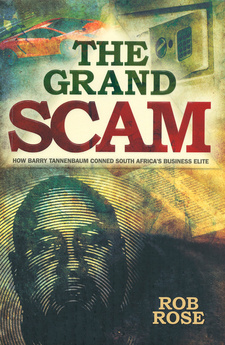 Journalist Rob Rose analyses how The Grand Scam inflicted hundreds of investors in South Africa, Australia and Europe how it had ploughed more than 12.5 billion Rand into Barry Tannenbaum’s scheme, based on the empty promise of immense riches.

Prologue to: The Grand Scam

'Are you sitting down?' asked the voice on the end of the line. 'I've got the story of your life.' Journalists are told that a lot. Usually it's a whopping exaggeration. Usually it's just the story of the caller's life. Perhaps good enough for a 400-word page-nine filler. With a big picture. If you're lucky. But this time, the caller was Warren Goldblatt, a five-foot-eight investigative veteran who runs his own 'intelligence company', Specialised Security Group. The first time you see him, you're struck by his resemblance to the box-shaped children's character Mr Strong. Goldblatt, who operates out of an innocuous office park in the industrial area of Marlboro, has a mystique about him. The rumour, whispered behind lowered fingers in some circles, was that Goldblatt's company was a Mossad front. But then, an equally prominent rumour was that he assisted al-Qaeda cells in South Africa, so you took your water-cooler chatter with a taste of salt. What was true was that Goldblatt got sharp intelligence. Thanks to an extensive network of informants in government departments you didn't even know existed, Goldblatt would drop several facts into any casual conversation, each of which could easily be the subject of a Pulitzer Prize-winning investigation. If you had the tentacles to confirm the spectacular tales, that is. But Goldblatt had come in for some serious heat in the previous four years for supposedly using illegal tactics to spy on his targets. It was scary stuff: stories emerged in the press detailing how, for not much more than R100, he could get you a copy of someone's bank accounts or their telephone records. Illegal, sure, but then everyone was doing it. Goldblatt denied it. 'I'm not Rockefeller, I'm the other fella,' was a favourite line he trotted out, as if to suggest that had he broken the rules, he would be a lot richer. It was Goldblatt who called me out of the blue with the story of my life. 'You might want to see what you can find about someone called Barry Tannenbaum,' he said. 'And a lawyer called Dean Rees.' I hadn't heard of either. Goldblatt said I'd know about them soon enough. He added that we needed to meet. 'I've got a library for you,' he told me. We planned to meet a few days later, with his client - one of the 'investors'. Two hours later, I got another call, from a lawyer I knew. A reliable source of scandal, but as jumpy as a colt. 'I've got the story of your life,' he told me. 'We need to talk.' There was a big meeting the following week at law firm Routledge Modise, he said, about this massive investment scheme that had gone bust. 'Stands to embarrass the whole country, big CEOs who lost out. Looks like it's a scam,' he assured me. 'I'll call you later with details,' he said, 'but don't tell anyone, it's a big secret.' Then he hung up. I was intrigued. But this Barry Tannenbaum was nowhere to be found: anonymous on the internet, absent from all the databases I could lay my hands on. The only thing Barry Tannenbaum had done until that point, it seemed, was to work at Times Media - the media conglomerate that owns the Sunday Times and Business Day newspapers - during the late 1990s, peddling advertisements. Then he'd disappeared. [...]

This is an excerpt from the book: The Grand Scam, by Rob Rose.

Brett Kebble - The Inside Story

Carte Blanche 25 Years. The Stories Behind the Stories

Carte Blanche burst onto the scene 25 years ago as a genre never before seen on South African television and tells the stories behind the stories.

Beyond the miracle: Inside the new South Africa

Behind the mircale is a competent and skilful study that opens up a perspective inside the structures of the new South Africa.