The good doctor, by Damon Galgut 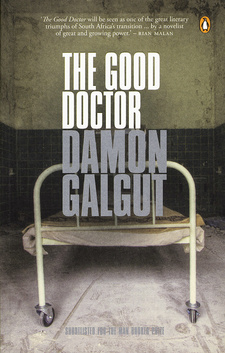 The passing of apartheid robbed South Africa's white novelists of a great artistic cause. Some, like Nadine Gordimer, J. M. Coetzee and Andre Brink, are tried to reinvent themselves. Of the younger generation, Damon Galgut, with his spare, unhurried sentences, his carefully chosen words, at that time was the most talented.

Hundreds of miles of desolate, monotonous, burnt-up steppe cannot induce such deep depression as one man when he sits and talks, and one does not know when he will go.

The first time I saw him I thought, he wont last. I was sitting in the office in the late afternoon and he appeared suddenly in the doorway, carrying a suitcase in one hand and wearing plain clothes - jeans and a brown shirt - with his white coat on top. He looked young and lost and a bit bewildered, but that wasn't why I thought what I did. It was because of something else, something I could see in his face. He said, 'Hello ... ? Is this the hospital?' His voice was unexpectedly deep for somebody so tall and thin. 'Come in,' I said. 'Put down your bag.' He came in, but he didn't put down the bag. He held it close while he looked around at the pink walls, the empty chairs, the dusty desk in the corner, the frail plants wilting in their pots. I could see that he thought there'd been some kind of mistake. I felt sorry for him. 'I'm Frank Eloff,' I said. 'I'm Laurence Waters.' 'l know.' 'You know ... ?' He seemed amazed that we should be expecting him, though he'd been sending faxes for days already, announcing his arrival. 'We're sharing a room,' I told him. 'Let me take you over.' The room was in a separate wing. We had to cross an open space of ground, close to the parking lot. When he came in he must have walked this way, but now he looked at the path through the long grass, the ragged trees overhead dropping their burden of leaves, as if he'd never seen them before. We went down the long passage to the room. I'd lived and slept alone in here until today. Two beds, a cupboard, a small carpet, a print on one wall, a mirror, a green sofa, a low coffee table made of synthetic wood, a lamp. It was all basic standard issue. The few occupied rooms all looked the same, as in some featureless bleak hotel. The only trace of individuality was in the configuration of the furniture, but I'd never bothered to shift mine around till two days ago, when an extra bed had been brought in. I also hadn't added anything. There was no personality in the ugly, austere furniture; against this neutral backdrop, even a piece of cloth would have been revealing. 'You can take that bed,' I said. 'There's space in the cupboard. The bathroom's through that door.' 'Oh. Yes. Okay.' But he still didn't put down his bag. I'd only heard two weeks before that I would have to share a room. Dr Ngema had called me in. I wasn't happy, but I didn't refuse. And in the days that followed I came around, in spite of myself, to the idea of sharing. It might not be so bad. We might get on well, it might be good to have company, my life here could be pleasantly different. So in a way I started looking forward with curiosity to this change. And before he arrived I did a few things to make him welcome. I put the new bed under the window and made it up with fresh linen. I cleared a few shelves in the cupboard. I swept and cleaned, which is something I don't do very often. But now that he was standing here I could see, through his eyes, how invisible that effort was. The room was ugly and bare. [...]

This is an excerpt from the novel The good doctor, by Damon Galgut.

'The Impostor' evokes the landscape of the Karoo and pushes various ideas regarding alienation and human interaction that seem to be recurrent themes in modern South African literature.

'The Quarry' is a stark, intense, and crystalline novel in which human nature is set against the desolate backdrop of rural South Africa.