The Dragonflies and Damselflies of South Africa, by Michael Samways 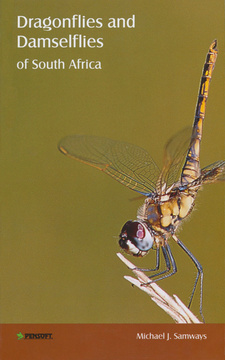 The Dragonflies and Damselflies of South Africa by Michael Samways provides rapid guidelines and definitive keys and drawings.

"Jigamanzi!" an old Zulu man exclaimed as he pointed to a dragonfly flitting across the glinting water in the heat of the afternoon. By his graceful hand movements, I took it that he was calling it a 'water-dancer, a name that warms my heart to this day. At times though, these water-dancers have seemed more like sirens as I've ventured into crocodile-infested waters to get that ever better photograph of the elusive Silhouette Dropwing. Yes, indeed, dragonflies are beautiful! Poets and artists in many countries around the world cannot be wrong as they capture the grace and charm of these aerial wonders. It is difficult to believe sometimes that a creature as beautiful as a Two-striped Skimmer emerges from such an ugly, mud-inhabiting, crawling little monster as its larva! Although a dragonfly may be seen occasionally on the wing on a warm winter's day, it is in the height of summer when some stretches of water are bubbling with them. Without doubt, they are major players in shallow freshwater ecosystems. But they are more than just functional components of the warp and weft of life. They are fascinating in their own right, and even more so when one considers that over a fifth of the South African species occur here and nowhere else. South African dragonfly identification was developed principally by F. Ris, K.H. Barnard, E. Pinhey and B.I. Balinsky. It is now over 50 years since Pinhey produced his landmark 'Dragonflies of southern Africa'. Since then, there have been many new discoveries, many corrections and much more information on distribution and ecology. This book is a response to that evolution in our knowledge, being an introduction to all South African species in their living environment. Although, it includes recent discoveries in the South African dragonfly fauna, there is still an enormous amount we do not know. There are still likely to be more new species discoveries to be made, but nevertheless, it is timely to review the South African dragonflies. The aim is to raise awareness through a field guide and handbook, much as has been done for plants, birds and mammals. A field guide is a first step in arousing conservation concern. This guide is meant for those enthusiasts with no more equipment than close-focus binoculars and a hand lens. Although some dragonflies are famously easy to identify, others are notoriously difficult; nevertheless, using this book, both specialist and aficionado, will be able to identify males and associated females in the same habitat. This book provides rapid guidelines and definitive keys and drawings. The Quick-key is for rough grouping into various colour options. For example, which dragonflies are red, or which damself lies have a distinctly striped, powdery blue and black thorax. Other options include flicking through the book, or following the Species Key. In the Species Accounts all the necessary detail is given on the one page, allowing possible identification from the photographs, and definitive identification from the drawings. Supplementary photographs enable further confirmation.

This is an excerpt from the book: The Dragonflies and Damselflies of South Africa, by Michael Samways.

The Dragonflies and Damselflies of South Africa

This entomological book is about the exciting fauna of dragonflies and damselflies in South Africa.

Butterflies of the Western Cape

Butterflies of the Western Cape is an informative, user-friendly guide that assists gardeners and nature lovers alike.

Butterflies of the Cape Peninsula

Butterflies of the Cape Peninsula is a comprehensive field guide to all the butterflies of South Africa, with over 280 individual photographs.

For easy identification in the field this comprehencive field guide features all of South Africa’s more than 660 butterfly species.