The Devil in the Detail, by Paul Holden and Hennie van Vuuren 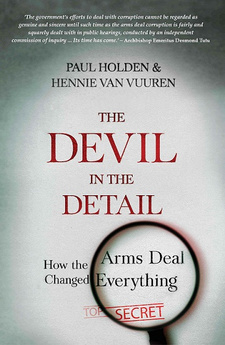 Along with researcher Paul Holden, Hennie van Vuuren co-authored The Devil in the Detail, a book on the recent South African Arms Deal. The ‘Arms Deal’ was never a single event. Rather, it was and still is a series of scandals and outrages, all contributing towards a dubious momentum that takes South Africa further away from democratic practice.

The Politics of Criminality and the Culture of Uncertainty

There is little doubt that when the Acting Head of the National Prosecuting Authority, Mokotedi Mpshe, announced that corruption, fraud, and racketeering charges against Jacob Zuma were to be dropped, it constituted a defining moment in South Africa's post-apartheid political life. Zuma's association with the charges, stemming from the corruption trial against his financial advisor, Schabir Shaik, had been in the public domain for close to six years. His legal team, and the various political players who sought succour in the warm embrace of his potential presidency, had claimed a conspiracy hatched by political opponents, including his former exile comrade, Thabo Mbeki. Various legal applications confirmed and then subsequently refuted the claim. It was Mpshe's announcement that finally drew a conclusive line under the matter. In justifying his decision, Mpshe quoted from cspy tapes' that had been gathered as part of the National Intelligence Agency's probe into the Browse Mole Report - a document compiled by a former Scorpions operative alleging that Zuma had received substantial financial support from various backers such as Libya's Colonel Gaddafi, and that supporters close to Zuma were planning a coup in the case of his conviction. The 'spy tapes', Mpshe argued, proved that the conduct of the Scorpions in the investigation into Zuma was irredeemably tainted. It was not, by his own account, an easy decision to reach: CI stand before you to announce the most difficult decision I ever made in my life.'1 It was also one supported by scandalous verbatim transcripts of conversations between the former head of the NPA, Bulelani Ngcuka, and the
head of the Scorpions, Leonard McCarthy, which were presented as evidence of the conspiracy. References to the 'big man were made - assumed to be none other than Thabo Mbeki, also attributing to him the desire to wipe the eggs of our faces2 following Jacob Zuma's election to the Presidency of the ANC at the less-than-cordial Polokwane Conference in December 2008. The statement made by Mpshe was, and will probably remain, lodged firmly in the South African consciousness. Jacob Zuma, after years of legal bun-fights, was no longer a corrupt accused'. Instead, his tortuous ascent to the pinnacle of South African politics was assured. For his supporters, it was the final vindication, a triumphant moment redolent with schadenfreude. Those with more cynical and critical dispositions questioned the decision. By Mpshes own admission, the 'substantive merits' of the case against Zuma remained intact, and his 'fair trial rights' had not been infringed: in plain language, the case against Zuma remained solid, and he would receive a fair trial if it proceeded to court. Shortly thereafter, it was uncovered that Mpshes legal reasoning had been lifted, sometimes verbatim, from a judgment delivered by one Justice Conrad Seagroatt in the Hong Kong courts, a judgment that was subsequently overturned on appeal. [...]

This is an excerpt from the book: The Devil in the Detail, by Paul Holden and Hennie van Vuuren.