The Art of Losing. Why the Proteas Choke at the Cricket World Cup, by Luke Alfred 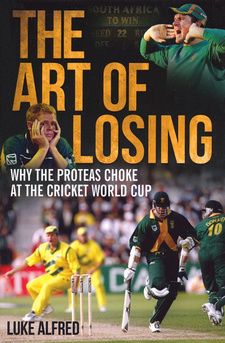 The Art of Losing is a book about failure and the Protea Cricket Team. It is also a book about ghosts, and about how ghosts tend to haunt even the brave and strong-willed, the courageous and the noble. South Africa have played in six 50-over World Cups since 1992 and have not reached the final in any of them, despite hosting the tournament in 2003 and arriving at some of the tournaments either as the top-ranked side in the world or on the back of an impressive winning streak - as they did in 1996.

All this begs the question how, with such a fine side regularly at its disposal, can South Africa not win at World Cups? Clearly something is wrong.Is it because of behind-the-scenes bungling, poor selection or changing key personnel, like coaches, too close to major tournaments, as was the case with Corrie van Zyl's appointment a little over a year before the 2011 World Cup? Is it because of a cricket culture that somehow feels residually but fundamentally entitled to victory, given that when South Africa played their last Test cricket before banishment in 1970, the national side thumped Australia 4-0? Do we believe we have a preordained right to win, in other words? Or does the shadow of the past haunt South African cricket to a degree that is still felt but seldom acknowledged? Can a team that represents the nation not function at optimum levels if the nation doesn't somehow feel itself to be a nation at all? After all, how can a game as starkly existential as cricket not fail to mirror the anguish and unfinished business of a newly democratic society as a whole, an anguish that the national soccer and rugby sides don't have the same kind of purchase on because those sports, by their very structure and the limited duration of matches, are better able to hide insecurity? Could the reason for successive World Cup failures be found in the schools system, from which all our elite cricketers come, and its associated dependence on individual heroism of the Lance Klusener variety? Perhaps the problem is not to do with society at large but with cricket itself. It was the cricketers, after all, who failed to bowl their overs quickly enough in the opening game against the West Indies at Newlands in 2003, a failure that probably cost them the game. It was the cricketers and their support staff who failed to add a run to the Duckworth-Lewis table at Kings-mead against Sri Lanka several weeks later. It was the cricket administrators who chose to give Mickey Arthur, a plausible, convincing man who has since taken on one of the biggest jobs in the cricketing world in becoming the coach of Australia, a coaching assignment for which his limited background probably hadn't prepared him. The same could be said of Eric Simons, another relatively inexperienced man who was offered the Proteas' coaching job, an offer that no one in their right mind could refuse. It is all very well blaming extraneous factors; perhaps it is the intrinsic factors, the factors pertaining to the culture of cricket in this country, that finally determine our lack of success. While this book addresses the overall question of our failure in the World Cup tournaments, it also acknowledges that every tournament was different. Every World Cup took place at a certain time and in a certain place. South Africa didn't prepare very well for the boredom of Guyana in 2007; they didn't always cope with a swinging ball in England in 1999. These were different times, and different circumstances. To conflate all campaigns into one tradition of failure is hopelessly crude. It is also patently false. (...)

This is an excerpt from the book: The Art of Losing. Why the Proteas Choke at the Cricket World Cup, by Luke Alfred.

When the Lions came to town: The 1974 Rugby Tour to South Africa

When the Lions Came to Town vividly recreates a tumultuous rugby tour in 1974 that sent shockwaves through South Africa.