The arms deal in your pocket, by Paul Holden 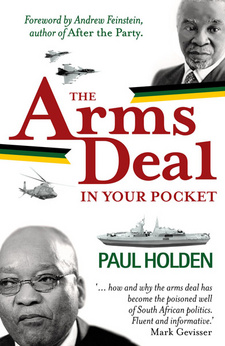 The arms deal in your pocket, by Paul Holden.

Andrew Feinstein wrote the following foreword to Paul Holden's The arms deal in your pocket and explains the impact on South African public life.

The Arms Deal and its cover-up continue to cast a vast, dark shadow over South African public life. The ANC President, Jacob Zuma, has been charged with fraud and corruption in relation to the deal and will contest the next election as the ANC's candidate for President with his trial on these charges hanging over him. President Thabo Mbeki's legacy will forever be tarnished by his central role in the deal and his determined undermining of a thorough and unfettered investigation into it (in addition to the far greater crimes of his unabashed and deadly Aids denialism and his support for the criminal regime of Robert Mugabe). The Arms Deal and its cover-up were the moment at which the ANC and the South African government lost their moral compass, when the country's political leadership was prepared to undermine the institutions of our democracy - for which they and many others had fought - to protect themselves and the party. It was the point at which, in the words of Edward Said, they were prepared to 'repeat untruths until they have the force of truth'. In late 2008, as a direct consequence of the Arms Deal and its cover-up, the state and the ruling party seem constantly willing to undermine the rule of law to serve their interests.

Leaders of the ANC and its allies claim they will kill to ensure that Jacob Zuma becomes President, referring one assumes to the corruption trial which could thwart his ambitions. The current Speaker of Parliament, Baleka Mbete -also the ANC's national chairperson and chair of the party's 'Political Committee' - closed down the Travelgate prosecutions, which resulted in senior MPs being prevented from facing the legal consequences of that sordid chapter in the life of our democratic Parliament. The President suspended the Director of Public Prosecutions who dared to issue a warrant for the arrest of the Commissioner of Police, who had been implicated in corruption and perverting the course of justice.

As a consequence of a massive public outcry, he then appointed Frene Ginwala, an ANC loyalist who, as the former Speaker of Parliament, added to the chorus of ANC voices that excluded Judge Willem Heath from investigating the Arms Deal (despite a recommendation from Scopa), to judge whether his actions were warranted. These and other similar actions have created not just a crisis of governance in South Africa, but a moral crisis that threatens to destroy the very tenets of our democracy.

Paul Holden has written a succinct, informative and devastating handbook to the Arms Deal, the root of this crisis. He has deftly identified and explained the key aspects of the deal - the illogicality of many of the purchasing decisions, the allegations of corruption, the under-utilisation of the equipment bought, the cover-up and, most importantly, the crucial questions that remain unanswered. I would recommend this handbook to anyone concerned about the future of South Africa's democracy. And having read this disturbing indictment I would encourage you to join the call for a full, unfettered judicial and expert enquiry into the deal and its cover-up so that the South African public will, finally, know the full truth of this shameful episode in our democratic history.

nd then the perpetrators of this deal should face the full force of the law. It is only in this way that South Africa will be able to move forward and recapture the spirit of 1994 with an accountable government that focuses, not on the defence and protection of its leaders, but on the real issues facing us: the plight of the millions of our people who live in poverty, the almost six million who are living with HIV or AIDS, and the scourge of violent crime.

Contents of The arms deal in your pocket:

Foreword
Preface
Acronyms and Abbreviations
1 Türe Butter': Selling Arms in the New South Africa
2 Was the Arms Deal a Good Deal?
3 The Cover-Up
4 The First Casualty: Tony Yengeni
5 'Death of a Salesman': Joe Modise
6 Agent RS452 and the Resignation of Bulelani Ngcuka
7 The Case against Schabir Shaik
8 The Case against Jacob Zuma
9 Unfinished Business and Unanswered Questions
Appendices
Appendix A Who's Who and What's What in the Arms Deal
Appendix B The Only Arms Deal Timeline You'll Ever Need
Appendix C More Companies Than You Can Shaik a Stick At
Notes
Recommended Reading

This is an extract from the book: The arms deal in your pocket, by Paul Holden.