Tastes of Africa, by Justice Kamanga 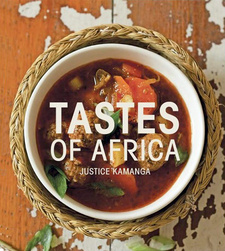 In his cookbook, Tastes of Africa, Justice Kamanga explores the tastes and textures of indigenous African cuisine, as well as dishes that have been influenced or introduced by foreign settlers to the continent from Asia, Europe and the Middle East.

No matter how up-to-date, no book on African food can ever be complete. Just as the sprawling continent is itself a work in progress, so too is its cuisine in a process of flux and evolution. The second-largest land mass on earth and home to hundreds of tribes, ethnic and social groups, Africa's diversity is reflected in its cuisine; in the use of inexpensive, basic, locally-available ingredients, as well as in the widely-differing cooking technigues and styles of preparation. Given the sheer size of the continent, the current vogue for African food means that no dish can ever be generic. Common to many parts of the continent are meals with little meat, plenty of whole grains and beans, and fresh fruits and vegetables. In an increasingly health-conscious society, African cuisine may well become the new healthy way of cooking. African cooking varies widely from one part of the continent to another. North, Southern, Central, East and West Africa all have their trademark dishes. This is fusion food - easily-prepared, readily-available foods that people eat now, subtly influenced by traditional African dishes. In this book you will realise how easily you can have an authentic, African-themed dinner party at home, using modern foods we eat every day, but given an easy and intriguing African slant, While there have been many books dealing with the traditional cuisine of individual African countries, often following the fickle whims of culinary fashion, in bringing you this book Justice Kamanga reaches beyond the single-country approach to the broad essence of African cooking and takes you on a beguiling epicurean journey through the continent to the soul of its cuisine. Just as Africa is often an enigma to the traveller, so its cuisine - paradoxically, perhaps - is deceptively simple, yet at the same time complex and unknowable in the antiguity of its ingredients, origins and preparation methods that have remained unchanged for more than a thousand years. The tastes and flavours of Africa evoke the continent itself, relatively unknown to those who haven't visited it, or who have only done so on a hectic in-and-out business or holiday trip that never leaves the time to dig beneath the ersatz safari ethos to the roots of its culture and traditions. You will discover the origins of many favourite dishes, united both by a disarming honesty and ease of preparation, and find that each fascinating flavour and intriguing new texture comes subtly through the taste of the whole, from the most caustic of curries to soothing cucumber- and yoghurt-based antidotes designed to put out the fire! Rural sea and lakeshore folk in Africa, accustomed to eating some fairly alarming-looking things from time to time, drew the line at having a beady eye ogling them from the aromatic, saffron-hued depths of their soup. When the fishermen returned from their labours at the end of the day, locals waiting on the shore to buy their catch usually asked for the heads to be taken off. This left the vendors with a cargo of fish-heads looking up at them accusingly from the bottom of the boat. Since this is a practical land where nothing is wasted, the heads ended up in the soup, although they are always removed before serving. [...]

This is an excerpt from the cookbook: Tastes of Africa, by Justice Kamanga.

The recipes in Tastes of Africa have been traditionally grouped, including starters, fish, meat, vegetarian, side dishes, desserts and breads.

Landshapes. The Geomorphology of Namibia

Beautifully explains the geomorphology and the natural shapes of the Namibian landshapes, with paintings, diagrams and text.

Relish. Easy Sauces, Seasonings and Condiments to Make at Home

Relish is a cookbook that aims to bring flavour into daily cooking and helps to make easy sauces, seasonings and condiments.

Sprinkled with personal anecdotes, Cooking with Jenny Morris captures the very essence of food in over 200 recipes.

Four Seasons. Cooking throughout the year in South Africa