Taming the Landmine, by Peter Stiff 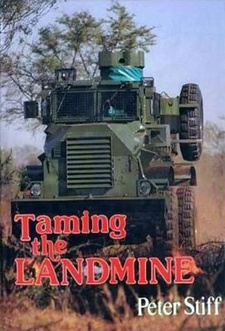 Taming the Landmine. Development of mine-protected vehicles in Southern Africa.

In his book Taming the Landmine Peter Stiff reveals how South Africa, by learning from Rhodesia’s experience, has taken the lead among Western nations in securing a highly sophisticated landmine-protection industry.

The title was written on the development of the landmine as a tactical weapon combined with the efforts made to combat its devastating effects. It was the advent of superior firepower in the 19th Century, particularly the machine gun, which caused soldiers to cease fighting in the open and seek cover in trenches. A natural follow-on was the appearance of barbed wire to defend those trenches against attack. The stalemate of the trenches in World War-1 was finally broken by the tank, a weapon designed to crush barbed wire entanglements, cross trenches and provide a protective steel shield behind the safety of which the crews could fight the opposing infantry. The landmine, developed by the Germans to combat the tank, made its first tentative appearance in the final stages of the war. World War-2 saw radical developments. The British and French hierarchy who still viewed the tank in much the same light as they had in the last war, were rudely surprised when the Germans utilised them in powerful and fast-moving formations with motorised infantry in support, to break through battle lines and cleave through the soft underbelly of the rear echelons. By the end of the war both the Allied and Axis powers had adopted the same armoured tactics. The unglamorous and inglorious landmine laid by the tens of thousands to combat armoured breakthroughs, or making landings from the sea, had become a major weapon in the hands of all armies. To breach minefields, the South African-invented flail tank and other devices such as mine rollers were brought into service by the Allies and used with great effect at the Battle of El Alamein and later on the Normandy beaches. The 1950s saw the beginnings of most of the post-war uprisings against colonialism in Asia and Africa. In almost every case the communists provided training as well as weapons to nationalist insurgents and successfully prised them away from Western influences. The landmine, instead of being used principally in its more usual role of holding up the advance of motorised enemy forces, began being deployed as a terrorist weapon to halt the movement of all civil and military vehicles in an effort to bring a country's economy to a halt and strangle the ruling administration. In the Portuguese colonial wars in Africa, the insurgents' landmine tactics worked exceptionally well. The Portuguese found no effective way of combatting them. In the early 1970s, the landmine menace spread to both the South African-controlled Caprivi strip of South West Africa (now Namibia) and to Rhodesia (now Zimbabwe). Both countries were stumped in their first efforts to find an answer, but they found it. A number of revolutionary ideas, including the v-shaped vehicle hull to deflect the blast of landmines, were successfully developed in both countries to minimise the explosive effects of vehicles and to reduce injuries and the deaths of people being carried in them. [...]

This is an excerpt from the book: Taming the Landmine, by Peter Stiff.