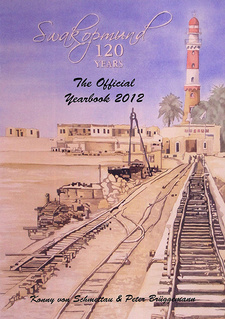 Konny von Schmettau and Peter Brüggemann had the honour to edit Swakopmund's official yearbook of 2012, when 120 years since its founding had past.

In the past, when people of the same mother tongue and origin met in isolated corners of the globe to look for common interests, they did so by establishing associations or societies with common goals. In this specific case, men of German descent formed the Swakopmunder Männergesangverein (Men's Choir) during 1902. The aim of this choir was to bring together people from all walks of life to sing and also to socialise. During those days not much else was on offer regarding entertainment in such an infantile town. Whether the "Southwester" sandstorms blew across the fragile buildings, or thick mist crept through the sandy streets, "Gemütlichkeit" prevailed inside the homes and guest houses after a hard day's work in the barren surroundings of the Namib Desert. Similar choirs formed in other towns and "Sängerfeste" (choir festivals and competitions) were organised and prizes allocated to the best performers. Throughout the years generations of members of this choir have seen to it that, as an active organisation in the social circles of our town, we have participated in many small and large cultural events, as well as celebrations and festivities. The men's choir, for instance, performed at the inauguration of the "Mole" in 1903. In the more recent history of the choir the members played host to a multitude of musical groups and especially choirs from abroad and South Africa. They usually visited the "Jewell of the West Coast" at the invitation of the Swakopmunder Männergesangverein who would always introduce them to the beauty of our quaint little town and its surroundings. During May 2012 a group of 24 mens choir members went on a concert tour to Germany for the second time since 2002. They were met with overwhelming hospitality from other choirs in various towns. The choir participated in six concerts at which purely Namibian programme was presented by the singers, well received by all the audiences. Now, one hundred and ten years after its inception, the choir is still going strong and is looking forward to act and perform in harmony with all Swakopmunders under the Motto: "Singen heißt verstehen" (To sing is to understand another). [...]

This is an excerpt from Swakopmund's official Yearbook 2012 (Swakopmund 120 Years), by Konny von Schmettau and Peter Brüggemann.

Swakopmund's official Yearbook of 2012 introduces to important events oin the history of the German founded town.

A journey through history and modern times of the mining town Oranjemund in South Namibia.