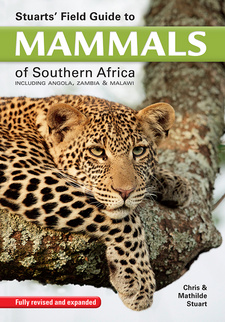 Expanded to include species found in Angola, Zambia and Malawi, Stuarts' Field Guide to Mammals of Southern Africa (Authors: Chris Stuart and Tilde Stuart) in its fifth edition has also been extensively revised.

The worldwide mammal group is a small one when compared with birds (9,500 species) or fish (30,000 species). It comprises between 4,700 and 5,500 living species, of which almost 400 are currently known to occur in the greater southern African region. Why this disparity in the number of species? New species are constantly being described, principally as a result of genetic investigation and species splits; very few are newly discovered species. In 2011 one group of taxonomists raised the number of ungulates (hoofed mammals) from 257 species to 450 worldwide by recognizing many subspecies as full species in their own right. Some of the smaller mammals, however, are known from very few, or even single, records. The richest period of mammal diversity was during the late Tertiary (5-2 million years ago), when an estimated three times as many mammal species roamed the earth than do so today. Taxonomists are constantly revising and reassessing the scientific status of many mammals, particularly the smaller species such as bats, shrews and small rodents. This often results in scientific names being changed and, on occasion, new species being described; Juliana's Golden Mole, for example, was described from the former Transvaal in 1972 and the Long-tailed Forest Shrew from the southern coastal belt of South Africa as recently as 1978. Recent genetic research has resulted in the Hottentot Golden Mole (Amblysomus hottentotus) being split into five new species. The bats are especially mobile, and it is very likely that additional species from this group will be discovered and added to the faunal complement of southern Africa in due course. Recently, taxonomists have been reassessing the status of many of the hoofed mammals and, according to some authorities, many more species should be recognized. Where we feel that this is relevant we have made note of such potential changes. Mammals have a number of common characters that set them apart from other vertebrates: they breathe with lungs; they possess a four-chambered heart; they have three delicate bones in the middle ear; the females have mammary glands that produce milk for suckling the young; and nearly all species have a covering of body hair.

The greater southern African region, defined as that part of the African continent and its coastal waters that includes and extends southwards from Angola, Zambia, Malawi and Mozambique, can be divided into 11 major biotic zones, each differing in climate and vegetation. This does, however, present an oversimplified picture, and each of these zones can be further subdivided into many different habitat and vegetation types. Many mammal species are restricted to one particular vegetation type or habitat, whereas others range over several.

Desert is characterized by very low rainfall (usually less than 100mm per year) and sparse plant growth. Extensive areas may be devoid of any vegetation, being covered by sand-dunes or consisting of flat gravel plains and rugged hill country. Several species of mammal have evolved mechanisms that help them to survive in this harsh environment. In the southern African region, this biotic zone is represented by the Namib, which stretches along the coast of Namibia, marginally in the north-west of South Africa and into southwestern Angola. [...]

This is an excerpt fromt Stuarts' Field Guide to Mammals of Southern Africa by Chris Stuart and Tilde Stuart.