Street Blues. The Experiences of a Reluctant Policeman, by Andrew Brown 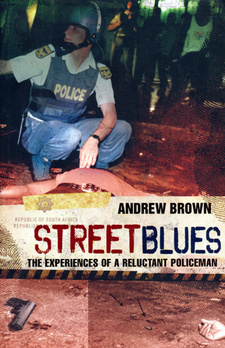 Street Blues: The Experiences of a Reluctant Policeman, by Andrew Brown.

Andrew Brown explores the stresses and complexities of police work in South Africa, the fear and frustration, as well as the camaraderie and courage. His book is Street Blues: The Experiences of a Reluctant Policeman.

The white Toyota Tazz bustles along the suburban road - rust-marks bubbled across the roof and flaking holes along the edge of the hatchback window. The driver, a young father of two, is slightly queasy, his stomach battling the hamburger and chips, topped with his youngest's leftover ice cream, clown-faced with Smarties. The little boy is propped up on the back seat, playing with his complimentary balloon. The mans wife sits alongside him, humming a tune played earlier in the restaurant, now snagged in her mind. Their daughter taps at the window pane, distractedly watching the quiet driveways passing by. The young father wonders whether the second half of the soccer match has started yet. His team is one-nil down already, playing badly. His wife had chided him for eyeing the television screen in the corner of the restaurant. He had missed the goal. Difficult for the team to come back, he muses, playing away from home, the crowd jeering at them. His wife is looking forward to climbing into bed after a long day on her feet. The day was so full that she had not noticed the fatigue until she sat down for the first time, and felt the nagging numbness in her toes. Tomorrow she must find time to get to the shops. She sighs to herself. The little boy knocks his sister on her head with the balloon and giggles; the girl protests loudly. The young man looks at them in his rear-view mirror, smiling. The BMW - a sleek 323i with metallic silver paint glistening in the streetlight - snakes down the tree-lined avenue. The thirty-something driver is coming back from a cocktail party in the city. He is alone in the car, the CD player wailing, Robbie Williams grinding his hips. The man is thinking about his colleague s new girlfriend, her tanned chest, tight top, friendly smile ... the blush of his palm across her forearm as he said goodbye, a flicker of recognition in her eyes, perhaps. The thought is both titillating and faintly saddening. He anticipates the entrenched patterns of his awaiting home, the familiarity of his front door, his wife's tired hugs. He shifts in his seat and, with one hand, pulls at a crease in his jeans, rucking up against his crotch. His cellphone rings loudly, competing with the music. He leans forward to pick it up with his other hand.

The intersection waits for them all, unconcerned. It is utterly silent. No one else is there. On a whim or by design, by fate or coincidence, the colours change as they approach, equidistant. Green to orange, the pause of a held breath, orange to red. The banality of traffic. Orderly life ticking by. The two cars enter the intersection at right angles. The distance between them is momentary, a flicker of space between two shapes. Neither driver lifts his foot to reach the brake pedal; there is just a tensing of facial muscles as they glimpse the arrival of the other. The BMW rams, brutally and squarely, into the rear left door of the Tazz. The full momentum of the car smashes into the thin metal, the grille biting into the smaller car with predatory jaws. The force is enormous. It crumples the tin door deep into the small car's interior, bowing the door inwards across the level of the back seat. Glass shards, plastic trimming and metal edges rip into the passenger sitting closest to the door, the little boy.

The bonnet of the BMW buckles and rears, like a startled antelope. The Tazz rises up on its two right-hand wheels, threatening to curl over, screeching in a slow circle. The car teeters, the metal rims of its wheels slashing at the road, leaving deep welts across the tar. Then it crashes down again, the windscreen exploding out and over the roof. Glass pieces rain down on the warmed roadway to the startling sound of clanging tin. Like dancers in a tender pas de deux, the two cars swirl about each other, moving together across the intersection that is their stage. Shuddering and slowing, pirouetting, parting. And then still. Silence again as they come to rest in the orange glow of the streetlights, waiting for their bow and the adulation of the crowd. But then the rising wailing of human fear, shocked mouths open, trapped behind shattered glass.

The driver of the Tazz starts to vomit, retching his night's supper out of a half-opened door. Robbie Williams builds up to a crescendo. A green balloon floats out of the destroyed back window, trailing a short piece of string. The little girl starts to scream when she sees her brother. The BMW driver retrieves his cellphone, now silent, from the floor of the driver's side, cursing. The airbag slackens limply over the shiny steering wheel. He punches an emergency number into his phone. The man's hoarse voice sets the process in motion: messages are tapped onto tired keyboards, voice recordings automatically stored, radios sputter into life. The first official to arrive on the scene is a police officer. A constable with six months' experience in the charge office, he has just finished his field training [...]

This is an excerpt from the book: Street Blues: The Experiences of a Reluctant Policeman, by Andrew Brown.