Steeped in Blood, by David Klatzow and Sylvia Walker. 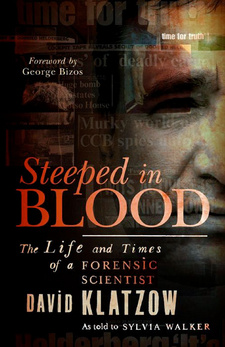 Steeped in Blood exposes a demanding and sinister world where the rewards are equalled only by the frustrations, and where the truth is always elusive. But the truth is out there, and David Klatzow will find it.

The truth was a complete misnomer in the turbulent 1980s. The state propaganda machine trumpeted out 'official' versions of events, portraying the 'successes' of the government in fighting the total onslaught in an attempt to brainwash the public at large. Unbeknown to most average South Africans, a common denominator in many of the political stories at the time was a place called Vlakplaas. Vlakplaas was a farm near Pretoria, and the headquarters of the South African Police counterinsurgency unit CIO. It rehabilitated 'turned terrorists', known as 'askaris' - the Kenyan name for 'warrior' - but actually operated as a paramilitary hit squad. Anti-government agents were arrested, taken to Vlakplaas, and asked whether they would switch allegiance and start working for the government. If they refused, they were shot at point-blank range in front of the others - a sure-fire way to persuade anyone to agree! Similar units were established in Camperdown in KwaZulu-Natal and in the Eastern Cape, but Vlakplaas was the flagship of this operation. It was truly a place from hell: on entering its gates, all decent and honourable conventions were abandoned as murder became a way of life and torture an entertaining diversion. No law applied here other than the eleventh commandment: Do not get caught. The men from Vlakplaas lied, raped, murdered and thieved their way around the country, behaving in the vilest way possible. They were led by a number of individuals, including Dirk Coetzec and later Eugene de Kock, who was dubbed 'prime evil' by the press. The tale of these men is told in many books, such as In the Heart of the Whore: The Story of Apartheid's Death Squads by Jacques Pauw. I do not wish to repeat what has already been told, save to say that Vlakplaas existed to aid and abet the grotesque policies of the successive National Party governments. These were men who operated outside the law and who were devoid of any decency whatsoever. The men of Vlakplaas needed money to further fund their operation, and they required something spectacular to show the political masters just how useful they were. That is when the bizarre scheme leading to the murder of the Gugulethu Seven was plotted. As discussed in Chapter 8, a number of young men were duped into thinking that they were to attack a police van. They had no idea that this was a trap, and that they were to be the victims of a police murder squad sent to create good publicity so that the political leaders would be grateful and open the national Treasury to provide more money for even greater obscenities. That is exactly what happened. The seven men were all murdered, weapons were planted and the national propaganda machine revved into action. The plot would have worked had it not been for the courage and integrity of Bateman and Weaver, who investigated it and told it as it was. [...]

This is an excerpt from the book: Steeped in Blood, by David Klatzow and Sylvia Walker.

Justice Denied: The Role of Forensic Science in the Miscarriage of Justice

Ten forensic disasters exposed in Justice Denied: The Role of Forensic Science in the Miscarriage of Justice.