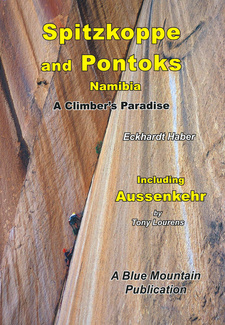 Spitzkoppe & Pontoks: Namibia, a Climber's Paradise has been published in its 3rd edition and it remains the only complete route book of the area available. Authors are Eckhardt Haber and Tony Lourens.

The Spitzkoppe, with its majestic granite peak is often called the 'Matterhorn' of Namibia. The harsh beauty of the desert surroundings, the unusual rock formations and the warm colours of the massive granite slabs, make this remote area unique and worthy of the comparison. The beauty of the mountain is also the reason that the Spitzkoppe area has become one of the main tourist attractions in Namibia. The rising frequency of visiting overlander trucks, self-drive tourists and day-visiting buses, unfortunately also has a negative impact on this fragile desert environment. Irresponsible and poorly disciplined tourists have also played their part in turning the existing campsites into litter heaps. The absence of proper sanitary facilities and regular maintenance of the campsites further exacerbate the problem. Tour guides and community leaders should be more committed in instructing their guests how to behave in nature. Nevertheless, high above the endless plains of the Namib Desert, there remains an almost untouched world where the climber can enjoy tranquillity and harmony on the sheer granite rock faces. Some 30 years ago, climbing in Namibia was an almost unknown sport and limited to a few individuals. It was then that the first natural lines were opened at the Spitzkoppe by pioneers like Eckhardt Haber, Rodney Lichtman and Hans Schreiber, to name just a few. These routes often had wide chimneys and off-width cracks, and were frightening and difficult to protect. A breakthrough was definitely the opening of the South West Wall route by Haber and his climbing partner of the time Clive Ward in 1982. It was the first route on the big south west wall. INXS followed in 1991 and was the first bolted route on the wall, following a direct line up a blank water streak. Since then a few more routes have been added to the wall, of which Herero Arch is one of the finest. With the turn of the century, popular sport climbing routes in Boulder Valley, developed mainly by members of the Namibian Section of the MCSA, added a further reason for climbers to visit the Spitzkoppe. Various Spanish teams also visited the area in the period after 2001 and developed a number of multi-pitch sport and mixed routes on the southern slabs of the Pontoks. In earlier years, mainly visiting South African climbers were opening new routes, but in recent years climbers from abroad are also visiting the area and opening new routes. Some great routes have been created, but unfortunately not all the lines have been chosen wisely. There is also a lack of communication between visiting groups and the local mountain club regarding the listing and publication of the latest route descriptions. Sadly there is also the ever-present debate about climbing ethics, which have gone as far as foreign climbers removing hangers and destroying bolts on established routes! This way of defending natural climbing style is by no means acceptable and is even dangerous. Compromise between traditional and sport climbing, rather than controversy, is a better way of keeping the moral playing fields level, particularly at the Spitzkoppe. The author of this book has a deep passion for the Spitzkoppe, returning at least once a year to his beloved granite peaks, no matter how far he has to travel. [...]

This is an excerpt fromt the climbing guide: Spitzkoppe & Pontoks: Namibia, a Climber's Paradise, by Eckhardt Haber and Tony Lourens.