Speaking out. Namibians talk about their perspectives on Independence, by Barbara Becker 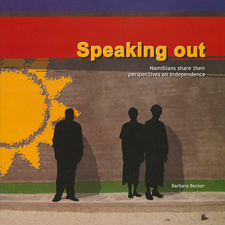 For her book, Speaking out: Namibians talk about their perspectives on Independence, Barbara Becker collected biographical stories of Namibians.

We sit together in comfortable easy chairs in his small house at the edge of the township and he proudly explains the pictures on the wall. One small oil painting shows himself and his wife, a Damara, decades ago; two photographs show his daughters in academic gowns. One has become a medical doctor in Finland, the other an administrator at Damelin College, Windhoek. There is also an enlarged black-and-white picture of his former school principal, Emma Kohl, relative of Helmut Kohl, the previous German Chancellor.

A witness right from the beginning

I was trained as a teacher at the Augustineum in Okahandja from 1959 to 1961. During that time I came to know Sam Nujoma who was a railway worker in Windhoek then. We started meetings with Nujoma and Toivo ya Toivo, now Minister of Nampower, in order to bring development to Namibia. They had already started to work politically in Cape Town in 1957. The first party to be formed was the OPO, Ovamboland People's Organisation. In 1960 it became SWAPO. This was for the whole country, not only for Ovamboland. It was the time of the Boers; and political parties and meetings were forbidden. But we, the students of the Augustineum, met with Sam Nujoma and Toivo ya Toivo and were told to register as members of their party. They asked what kind of problems we had at the school. We told them about our food problems. The food given to us was bad; it was not good. They asked us to compare it with the food eaten by the white students. Ja, the whites ate rice and vegetables and good food and we got only maize and innards, chopped stomachs and tea without milk. The white students received money: R10 pocket money; we had only 30 cents. They asked us to challenge the government and we did. There had been no challenge before; we were the first to challenge the government. We organised a strike. That was the start. It was the first strike. We walked on foot from Okahandja to the Parliament in Windhoek, all seventy-one students, the whole school. We couldn't afford to hire a truck. So we ran and we ran for one day and brought our case before the directorate of our homeland and the Ministry of Education. We had written a list of our complaints, they were thirty-two. I read them out and was photographed while reading. They took photographs of all of us and said, "OK, we have heard your complaints. Now go back to school; we'll look into the matter and solve your problems." We stayed in Windhoek for two days; then we went back and they changed everything. They met our demands. We ate well. There was no more maize to eat; we ate meat and white bread. We got blankets; before we only had mattresses. The thirty cents went up to five rand. We received everything and felt victorious. Shortly afterwards we had to do our practice teaching year at different schools and thereafter go back to continue our studies. I couldn't finish my studies: I was dismissed, some others also because we were supporters or members of the OPO. They did not want OPO in Namibia. As future teachers we would not be allowed to teach the learners politics; that's what they said. They had our photographs and identified us as political activists. [..]

This is an excerpt from Speaking out. Namibians talk about their perspectives on Independence, by Barbara Becker.

Speaking out. Namibians talk about their perspectives on Independence

What do the people in the streets of Namibia feel about the independence? Speaking out lets them talk about their perspectives.