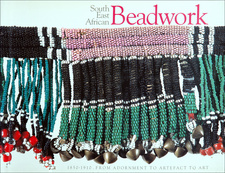 The late 19th-century pieces illustrated in South East African Beadwork 1850–1910 by Michael Stevenson and Michael Graham-Stewart, stand as a testimony to the creative spirit of the unidentified African wome; s skills and talents in the past produced extraordinary pieces.

The changing fortune of beads

The symbolic significance ascribed to some indigenous materials notwithstanding, the value attached to beads changed radically in the course of the 19th century. Once they lost serve of elite groups, they gradually assumed a host of new functions. Transformed into fashion items and used in courtship exchanges, their earlier importance in drawing attention to the status of chiefs and kings was irrevocably affected by the arrival in the area of large numbers of European traders. In the eastern Cape, the exchange value of beads depreciated so markedly after the 1780s that they soon lost their importance in underlining differences in status and power. At least until 1830, however, when this market became flooded with beads following a decision to lift a trade embargo between the Cape Colony and neighbouring Xhosa-speaking communities, Xhosa-speakers working for various missionaries were generally paid in beads. During this period, moreover, the bead trade was so lucrative that some of these missionaries actually chose to abandon their commitment to the church, becoming traders instead. Further north, the relations between indigenous and settler communities were rather more complicated, in part because the numerous Zulu speaking groups living beyond the borders of the Zulu kingdom had direct access to the European traders who settled at Port Natal in the mid 1820s. By the 1830s, the bead market in and around Port Natal had become so saturated that most of the local Zulu-speaking communities were increasingly unwilling to barter their fresh produce in exchange for beads. Writing in 1837, the Rev. Francis Owen, who arrived in Natal on his way to the Zulu kingdom, noted that his party had found great difficulty in getting 'a supply of our wants in this place, owing to the natives not choosing to accept the common articles of barter, which we had with us, beads and buttons. When we offered these in liberal quantities, they playfully threw dust into the air as a token of their contempt for these articles'. In the Zulu kingdom, further north, where a radically different situation prevailed - at least until the 1850s - the beads obtain from the Portuguese at Deiagoa Bay and later from the traders at Port Natal were delivered directly to the king, thereby ensuring royal control over their subsequent distribution. According to the Natal trader Nathaniel Isaacs, Shaka had an extreme aversion to 'anything like commercial traffic, and forbade it among his people' He made it very clear to these traders that he would not be willing to tolerate any attempts to sell beads directly to his subjects. Throughout the reigns of Shaka and Dingane, visitors to the Zulu kingdom consequently found it difficult to exchange beads for food or other commodities when dealing with the heads of ordinary homesteads. As Smith observed in 1832: 'For the purchase of what the Zoolas have to dispose of,... beads ... are of no avail, as no subject is either permitted to receive or possess them, unless as a gift from the king. [...]

This is an excerpt from South East African Beadwork 1850–1910, by Michael Stevenson and Michael Graham-Stewart.

Art & Aspirations. The Randlords of South Africa and their Collections

Highly lauded research on South African art and aspirations. A wealth of photographs depicts the Randlords of South Africa and their art collections.

South East African Beadwork 1850–1910: From Adornment to Artefact to Art

This book demonstrates the astonishing artistry of South East African Beadwork, its history from 1850–1910 and its development from adornment to artefact to art.