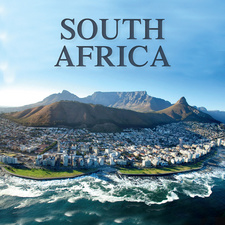 The interior of the Northern Cape is dominated by one large city and its 'Great Hole': Kimberley is the commercial, administrative and industrial focus of the entire hinterland and makes for a fascinating diversion in what is otherwise a rather featureless landscape (left). It is not a big city, even by South African standards, but it has come a long way since the days when it consisted of little more than a conglomeration of tents, shacks and a series of dry paths carved into the dust by the wagon wheels of fortune-seekers heading for the promise of wealth that lay in the diamond fields. In its heyday, Kimberley was a thriving place, one of untold riches, boundless opportunity and keen entrepreneurship, and today it may be considerably more restful than when it was populated almost exclusively by miners and missionaries. Today the tributes to these great founding fathers may be seen at the homestead museum of missionary Robert Moffat (above left) in Kuruman and the Diamond Workers' Monument (above right) at the Kimberley Civic Centre.

Kgalagadi and the North

Tucked away in the far northern corner of the country lies one of the subcontinent's most remarkable conservation feats: the Kgalagadi Transfrontier Park between South Africa and Botswana is Africa's pioneer trans-national reserve and one that has set the standard for many other such reserves on the continent. The region - arid and apparently inhospitable, but bathed in a deep glow of red, yellow and burnt orange - boasts a surprising diversity of floral and faunal life. Although best known for its blazing red sand dunes, the majestic oryx (gemsbok) and the tsamma melon (wild watermelon) - all-important in this thirsty landscape - the semidesert landscape of the Kalahari is also home to other large antelope, such as the blue wildebeest (above left), as well as smaller species, including the ubiquitous springbok. And simply because it is such a haven for so many herbivorous mammals, it also has its fair share of predators - most notably the black-maned lion (above centre), the bateleur eagle and the jackal (above right).

The region commonly known as the Kalahari - strictly a semidesert wilderness as opposed to a true desert - is the traditional home of the Bushman peopie (previous pages) and a place not immediately associated with an abundance of either flora or fauna. Nothing, however, can be further from the truth. It is, in fact, home to both the oryx, or gemsbok, and the lion (right), a number of even more prolific antelope species and even big game species such as cheetah, leopard,, wild dog and hyena. This is a land best known for its flat grasslands, distant horizon and endless sky, and although the landscape is dotted here and there with acacia trees, the vegetation is generally stark (above). However, in the middle of what seems a godforsaken portion of Africa, one of southern Africa's most significant natural features breaks the monotony of the world that surrounds it. It is here that hills (overleaf) interrupt the powerful flow of the mighty Orange River as it winds its way to the Atlantic Ocean on the west coast. [...]

This is an excerpt from South Africa, by Sean Fraser.