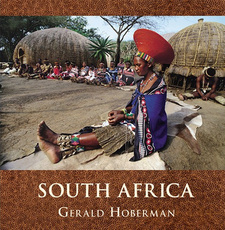 Many famous places in South Africa are represented in this large format coffee-table book. Gerald Hoberman (1943-2013) was a well known Capetonian, publisher and professional photographer.

Hole in the Wall, Wild Coast

In stormy weather, near the small river named Mpako on the Wild Coast, a roaring sound can be heard, which gets louder as one approaches the coast. Locals call the area esiKhaleni (the place of sound). The thundering echo is caused by waves crashing through a cavernous hole in a free-standing cliff wall across the river mouth. The Bomvana people, who live near the Hole in the Wall, regard the cavern with circumspection. Many shellfish-gatherers, tempted to explore the cavern, have been caught by an unexpected breaker and ground to death on the barnacles. The place got its English name from the records of the British survey ship Barracouta, which mapped the area in 1823.

The Wild Coast is aptly named: Xliosa people still farm its undulating hills in traditional ways and beyond its spectacular, empty beaches are dangerous seas which have wrecked many hapless vessels. The best-known wreck is that of the Grosvenor, a fully laden British treasure ship which came to grief on a stormy night in 1782 off the Pondoland coast. The cargo was rumoured to include the beautiful Peacock Throne looted from the kings of Persia, but this has yet to be found. At The Haven in the Cwebe Nature Reserve on the Mbashe River, the ocean's principal treasure can be hauled out with a line, as the many fishermen who frequent the little resort can testify. On the way there it is worth taking a detour to view the Colleywobbles, a series of involved windings in the Mbashe River, making it one of the world's most remarkable examples of a river meander.

The Kalahari Desert is a vast, unforgiving land where only the strong and resourceful are able to survive. Its name is derived from the Tswana word kgalagadi which means 'the great drying up', and it has been doing this over the last million years. Days are blisteringly hot. nights can be freezing and rainfall is sporadic. But its thousands of hectares are home to lion, leopard, cheetah, wild dog, gemsbok and herds ol wildebeest. By a miracle ol nature the animals can exist without rivers or waterholes - by feeding at night on plants wet with dew and on succulents which gain water from deep roots.

The topography of the dry. hot area along the Orange River in the Northern Cape varies dramatically. On one side of the river, the terrain is almost flat and vines are planted in deep, well-drained alluvial soils. On the opposite bank, the vineyards may be terraced in light, sandy soils, red and rich in iron oxide. In other parts in the region, vineyards have been established in soils ol pebbled limestone and quartzite. Orange River Wine Cellars, one of the largest cooperative cellars in the world, sources grapes from these diverse vineyards for its excellent wines.

Too sappy and fibrous for firewood, the magnificent quiver tree {Aloe dichotoma) is perfectly adapted to the arid regions of the Northern Cape. The tree grows to between 3 and 5 metres ir height, withstanding long periods of drought and producing erect yellow flower spikes in June ami July. Simon van cler Stel recorded the tree in L685 while on an expedition to the legendary Copper Mountains of the Nama people. On this trip he noted that the San hunters used the bark ol the tree to make quivers for their arrows. [...]

This is an excerpt from the book: South Africa (Hoberman large format), by Gerald Hoberman.