Solitaire: A Home in the Namib Desert, by Ton van der Lee 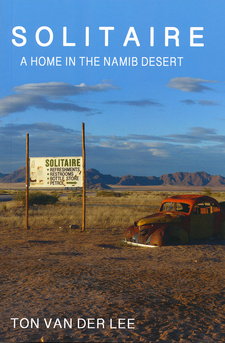 Ton van der Lee is a writer and a film maker. He has travelled extensively in Africa. He wrote a number of books about the continent, notably 'Solitaire: A Home in the Namib Desert' about his three year stay in the Namib Desert in the 1990s, when Namibia had just become independent. The book became an instant bestseller.

The warm, subtropical air outside Cape Town Airport is a relief after my ten-hour night flight from Amsterdam. It's a bright morning and the breeze smells of flowers and kerosene. I get into the first taxi I see. When it drives off I realise I've made a bad choice. The engine stutters, one of the wheels wobbles and there's an ominous rattle somewhere. Once we're on the highway there's a sudden muffled explosion. I look behind me and see we are trailing sparks; the exhaust has come loose. We pull over and the driver crawls under the car with a piece of wire and a pair of pliers. While he's trying to fix things I look at the high-rise buildings of downtown Cape Town in the distance and the huge, hazy shape of Table Mountain behind it. Beside the road, Nelson Mandela smiles down at us from a huge billboard. He's been president for two years now, but he hasn't yet managed to do anything about the endless shanty towns on both sides of the highway. Finally, we get going again. My driver isn't black and he isn't white. He's a kleurling, a coloured, the descendant of blacks and whites and the original inhabitants of the Cape, the Khoisan, small people with yellowish skin, a slight build and slanted eyes. The new arrivals called them Hottentots. They're a people that have lived here for more than a hundred thousand years, but now they've almost vanished because the invaders killed or enslaved them. Some say that many of them simply died of sorrow. I ask my driver to drop me off at Backpacker's Heaven, on the edge of central Cape Town. It's an old villa that's been converted to a hostel for budget travellers. The reception, TV room and the bar are downstairs, and the high old-fashioned rooms upstairs are full of bunk beds. The only two private rooms are booked because the season is about to begin, so I take a bunk bed. I've picked a backpacker hostel instead of a hotel because I'm hoping for information from the people passing through. I'm just beginning my trip, but Cape Town is also the final stop for many people who have done a loop through South Africa, Botswana and Zimbabwe. That takes about a month; travellers with more time party hard at Victoria Falls, and then travel on north towards Zanzibar and Kenya via Zambia or the Tete corridor. It's a bit of a dodgy trip to make on your own, so most choose the safety of an overland truck that accommodates up to twenty passengers and has experienced drivers (if you're lucky). A few adventurers apparently even go to Namibia, but that country is notorious for its lack of public transport, its vast, barren deserts and its terrible roads. It's only been independent for a few years after a long war and they say it's not quite safe, either. Backpacker's Heaven is full of Australian, English, German and other young adventurers. The ones who've been on the road for a while all look healthy and tanned, and the newcomers like myself are still pale and a little out of their depth. It's nice to have some people to talk to, because I feel a little unsure about everything. For the first time since I was a student I don't have a plan. [...]

This is an excerpt from the novel Solitaire: A Home in the Namib Desert, by Ton van der Lee.

Solitaire: A Home in the Namib Desert

Solitaire: A Home in the Namib Desert is a novel based on real events in Namibia.