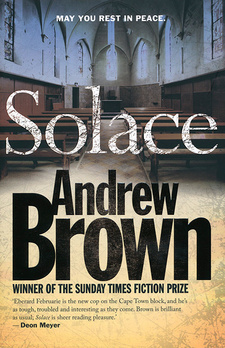 The title of Andrew Brown's latest novel, Solace, suggests the idea of comfort and consolation, perhaps even relief, or a form of safety from danger, says critic Jonathan Amid.

Arthur Shimansky pulled the lapels of his tweed jacket together. It was a vain endeavour to ward off the early-morning wind that whipped at him from the seafront. Chip packets and leaves skittered around his legs like rats, brushing against his trousers. The jacket was worn thin in places, with loose threads that waved free in the air. His wife, Dora, had patched one of the elbows, sewing a piece of imitation leather onto the torn fabric, making it stiff and difficult to bend. The other elbow didn't match, but Shimansky did not seem to mind. The coat was warm and familiar, and the Cape winter was at its foulest. The days of monotonous drizzle were endless, broken only by the blustery winds and heavy rains of an occasional storm. These were nothing like the summer storms in the Swartland he remembered from his childhood, where the rain hissed and smacked onto the hot stoep, drops bouncing and skipping across the painted surface like tossed mielie kernels. The city had none of this rural turmoil; a cold inertia seemed to have settled on the low horizon. Dora had always fussed over him, darning his clothes, knitting itchy woollen pullovers and jerseys. She would have shouted at him by now, leaving the house without his scarf and gloves. 'God can't be watching you every second of the day, Arthur.' He had managed to get by without her, and there were reasons to keep going, but his sense of purpose and direction had failed. Only habit drove him forward, the maintenance of his routine. He still made eggs with kippers on a Sunday morning, filling the small flat with an awful combination of smells. But the food was tasteless, the filleted flesh like ash in his mouth. He usually ended up throwing most of it away, putting the fish on a plate under the bushes for the neighbourhood cat. Yet to end the ritual would be to forget Dora, her weekly refrain, 'Nice kippers, Arthur', whatever their presentation. A hundred small observances, stacked up in loyalty and loneliness, making a life. And so the days passed, plodding ceaselessly, in some ways as if nothing had happened, yet also entirely shattered. It was nearly two years - he would not have thought it possible. The wind carried needles of rain off the sea, thin splinters that spiked his cheeks, leaving them rough and glowing red. He could smell the seaweed thrown up overnight, lying in oily clumps on the rocks. Beyond the main road he could see the froth churned up on the top of the swells, thundering into the Promenade wall, like rugby players shouldering into tackle bags. The physicality made him flinch. His left hip hurt and the angle of the road made the arthritis in his knee flare, slowing his progress. One of these days he would need a stick to help him navigate his way. He hoped the shul committee had not noticed; they were waiting for a reason to find a new caretaker. They felt he was a liability, and his body betrayed him with every jarring step. Shimansky stopped alongside a street pole and rested his knee. The tendon under the cartilage ached, where he could not reach it. He lifted the joint, letting his foot hang free for a moment, providing some relief. Above, two seagulls cried, the one chasing the other for a morsel it had found. Something moved between the parked cars across the road. [...]

This is an excerpt from the South African crime novel: Solace, by Andrew Brown.

Home Away is an exhilarating mix of memoir, travelogue, thriller, humour and speculative fiction.