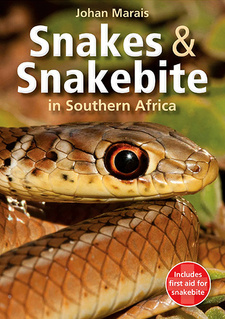 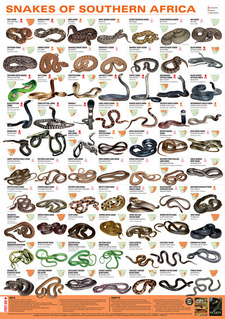 How to use this book: This guide to snakes and snakebite in Southern Africa is intended as a practical tool to the easy identification of all the region's dangerous and common harmless snakes.

Its other important purpose is to provide quick and practical advice on first-aid measures, should someone get bitten. Within the accounts that follow, each species is introduced by its English common name, followed by its scientific name and an indication as to whether the snake is harmless, mildly venomous, dangerous or very dangerous. A separate 'Look out for' column highlights each snake's most prominent features, be that body markings, diagnostic signs or behaviour. This assists in easily identifying a specific snake species. Colour photographs have been used unsparingly, especially where several colour forms exist or where snakes differ in colour according to region. Photographs of similar or easily confused species are also featured along with the snake under discussion to rule out confusion between species. While every effort has been made to avoid technical language, some technical terms have been necessary; these are explained in the Glossary, which appears on page 86. The 42 snakes featured in this book have been grouped according to four snake types: the adders (pages 14-25); the elapids (pages 26-47), the back-fanged snakes (pages 48-67), and the fangless and non-poisonous snakes. Alternative English common names and the Afrikaans name(s), appear at the top of the left-hand column, and simple icons convey additional information about the snake:

Distinct black rings or crossbars on the body and tail.
Often found on tarred roads.
Active at night, especially after rain.

Preferred habitat: The Namib Desert and Karoo regions of central and northern Namibia, extending into the southern reaches of Angola.

Habits: A nocturnal snake that is often found on tarred roads. It is shy choosing to escape if it has the choice, but if cornered will spread a hood and may spit its venom.

Similar species: May be confused with the harmless Tiger Snake and the Coral Snake.

Food and feeding: Feeds on other snakes, lizards, toads and small mammals.

Danger to man: Common where it occurs, and accounting for many bites among humans. This snake's venom is dangerously cytotoxic. This snake spits readily and effectively but is not confrontational and usually chooses to escape.

Venom: A potent cytotoxic venom which may cause severe tissue damage. It bites and also spits venom. For treatment of venom in the eyes, see 'Spitting Snakes' on page 10.

This is an extract from: Snakes and Snakebite in Southern Africa