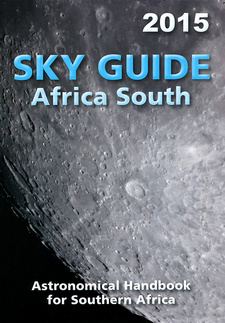 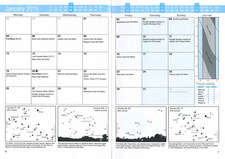 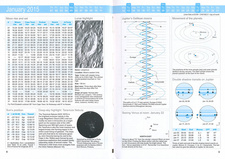 Published by Astronomical Society of Southern Africa and Random House Struik annually, the Sky Guide Africa South 2015 is the 65 th issue since the first year of the journal.

The story of astronomy in South Africa

On December 17, 1652, eight months after landing in Table Bay, Commander Jan van Riebeeck observed a bright comet. His journal entry reads: "Savonts omtrent tusschen 9 a 10 uijren sagen in 't O. Z. Oosten suijwaerts van 't hoofft van den revier omtrent 80 graden bove den horisont een vreemde star met een staert streckende de staert noortwaerts recht op de knie van den reuijs ende 't hooft meest Zuijen omtrent 10 grad: van aff." The comet, now designated C/1652 Y1, is currently in Hercules, slightly over 282 AU from the Earth. Partly because Cape Town was easily accessible to northern hemisphere astronomers, the Royal Observatory at the Cape of Good Hope dominated early South African astronomy. It was established in 1820 and was the first permanent astronomical observatory in the southern hemisphere. From 1834 to 1838 Sir John Herschel worked at his private observatory in what is now Claremont, Cape Town, where his search for star clusters, nebulae and double stars was extended to the south, thereby completing the work his father, Sir William Herschel, had begun in the northern hemisphere. In later years, the excellent observing conditions on the Highveld were exploited and other major observatories were established. The Natal Observatory was founded in Durban for the 1882 transit of Venus, with Nevill (alias Edmund Nieson) as astronomer. A small transit circle was used to provide a public time service. The observatory was closed in 1911. In 1903 the Transvaal Meteorological Department, from which the Republic Observatory late developed, was created, and RTA Innes, then Secretary and Librarian of the Royal Obsérvate; was appointed as its first director. By the 1920s, South Africa's reputation as a choice observim location was known internationally. With strong support from the Union Government, foreign institutions established southern stations here. These institutions were Yale (Johannesburg), Harvard (Boyden at Bloemfontein), Radcliffe (Pretoria), Michigan (Lamont-Hussey at Bloemfontein) and Leiden (Hartebeespoort). Many astronomers with worthwhile programmes were therefore able to work with great efficiency and produce data of very high quality. Indeed, some of the large-scale fundamental photometric and spectroscopic programmes completed at the Cape and Radcliffe Observatories have no counterparts in the northern hemisphere. In 1961 South Africa became a republic and as a result of the policy of apartheid, sanctions were imposed. After apartheid, the international scientific community is once again investing in our premier night skies. One exciting post-sanction infusion into southern African astronomy is the Southern African Large Telescope (SALT) at Sutherland. A project that will dwarf SALT in scope and financial investment is the Square Kilometre Array (SKA), which is a shared project between South Africa (-70%) and Australia (-30%). We are in a prime position to observe the stars, but one must never accept that our dark skies are a permanent advantage: it will involve foresight, support and political will to keep the sky dark and free of radio interference. [...]

This is an excerpt from the guide: Sky Guide Africa South 2015, by Astronomical Society of Southern Africa.

Sky Guide Africa South 2015 is a practical resource for astronomers, whether novice, amateur or professional.

Sky Guide Africa South 2017 is intended as a reference work for both the established astronomer and the casual sky watcher in Southern Africa.

Sky Guide Africa South 2016 is an annual publication of the Astronomical Society of Southern Africa.

The Sky Guide is a well-established astronomical handbook for Southern Africa and is intended as a reference work.