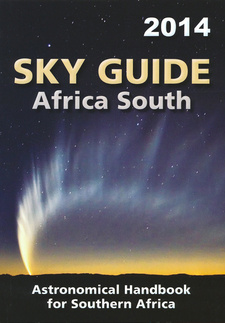 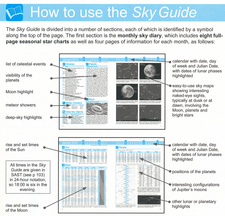 The Astronomical Society of Southern Africa, together with Struik Nature, publishes this annual astronomical guide. Now in its 64th year of publication, the book is prepared by a team of contributors, all specialists in their fields.

The Sky Guide Africa South 2014, published by Astronomical Society of Southern Africa (ASSA), together with Struik Nature, continues the tradition of the well-established Astronomical Handbook for Southern Africa and is intended as a reference work for both the established astronomer and the casual sky watcher. This is its 68th year of publication. Data is obtained from the JPL Horizons ephemeris generator, Occult 4.1 (David Herald), Stellarium 0.10 (Fabien Chereau et al.), Cartes du Ciel 2.76c (Patrick Chevalley), A Dictionary of Modern Star Names (Paul Kunitzsch and Tim Smart), Edwin Goffin (occultation predictions), the Lunar and Planetary Institute (lunar photographs) and the Digitized Sky Survey (Association of Universities for Research in Astronomy, Inc. & the Anglo-Australian Observatory Board). Assistance was received from the ASSA Secretary, Directors and Specialists of the Sections, and Secretaries of the Centres. Contributions by Tim Cooper (comets and meteor showers), Greg Roberts (artificial satellites), Chris Stewart (choosing a telescope), Carol Botha (light pollution) and Chris de Coning (historical material) are gratefully acknowledged. Special thanks is due to Johan Retief, Johan Smit, Pumlani Sibula, Thembela Mantungwa and Nomawethu Martin for help in compilation of the Afrikaans and isiXhosa lexicons. Many South African astrophotographers contributed their work freely to the Sky Guide Africa South 2014 and are thanked for their beautiful submissions. Photographers are invited to submit their work for consideration for publication in future editions.

This handbook is divided into a number of sections, each of which is identified by a symbol along the top of the page. The first section is the monthly sky diary, which includes eight full-page seasonal star charts as well as four pages of information for each month, as follows:

Following the sky diary are sections on:

This is an excerpt from the astronomical guide: Sky Guide Africa South 2014, by Astronomical Society of Southern Africa.

The Sky Guide is a well-established astronomical handbook for Southern Africa and is intended as a reference work.

Sky Guide Africa South 2017 is intended as a reference work for both the established astronomer and the casual sky watcher in Southern Africa.

First Field Guide to Skywatching in Southern Africa is a fascinating insight into the southern skies by night.

How on Earth? sets out to answer puzzles in nature and the environment of Africa and the world.

The Story of Earth and Life. A southern African perspective on a 4.6-billion-year journey

The Story of Earth and Life explaines southern African scientific knowledge in a fascinating and easy-to-understand way.