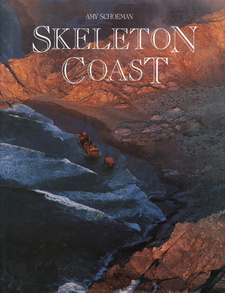 The Skeleton Coast of Namibia - an area once feared and shunned because of its treacherous coastline - is now prized as a place of beauty and tranquillity, a place of magnificent solitude. This is the preface, by Amy Schoeman.

The reader can share in experiencing strange beauties ot the Skeleton Coast through the visual feast presented in this magnificent book, written und fotograpfed by Amy Schoeman. My first visit to the Skeleton Coast was in October 1977. I went as photojournalist for the then Division of Nature Conservation and Tourism, to obtain material for an article on the wilderness section of the Skeleton Coast Park. It was on this first trip that I met my husband, Louw Schoeman, whose enthusiasm for the area was infectious and who, from the outset, aroused my interest in its long-term conservation. He had then already been closely associated with the Skeleton Coast for nearly twenty years. Practising as a lawyer in Windhoek, he initially came to know the terrain through clients interested in prospecting, and subsequently became involved in the search for diamonds himself. As a director of the original Westies Minerals Company, he played a leading role in the formation of the consortium which planned the building of a harbour and the development of an infrastructure. He was also the founder and subsequently a director of the Sarusas Development Corporation, and as such participated in the research and other activities undertaken by the company. When the South African government unilaterally withdrew from the harbour scheme, his appreciation of the area caused him to direct his attention towards its conservation. In those early years he took small groups of friends to the Skeleton Coast for a few days of relaxation. During these visits he became increasingly captivated by the extraordinary beauty and diversity of the landscape. He also became aware that the remoteness and untouched nature of the terrain had therapeutic and perspective-giving qualities. The concept was born to promote the region as a wilderness area by flying in small groups of paying guests and giving them a „desert experience".

He persuaded his group to donate the research station, an amount of money and the workshop and vehicles at Möwe Bay to the conservation authorities for the establishment of the first control post at the Skeleton Coast. This added momentum to efforts to have the stretch of coastal desert proclaimed as a park, as had originally been envisaged in the Odendaal proposals. This goal was achieved in 1971. It was subsequently decided to retain the northern section of the proclaimed area as a wilderness reserve, where a limited and controlled form of tourism would be practised. In 1977 Louw tendered for and was awarded the concession. His contract was for five years, after which he could apply for a renewal. Two renewals were granted. For the next 16 years he flew small groups of paying guests into the concession area. Care was taken to restrict driving to existing tracks. New ones were made only after careful deliberation and when deemed absolutely necessary. To keep the environmental impact to the minimum, guests were initially accommodated in the old Sarusas mining camp, and after a year in rudimentary but comfortably equipped tented camps.

An important feature of the safaris was educating visitors about the geology, climate, flora, fauna and other ecological aspects of the desert. Louw believed that engendering an appreciation and understanding of the Namib would ultimately serve to promote its conservation. Over the years his name was to become synonymous with the Skeleton Coast. Today he is widely recognised as the pioneer of ecotourism in Namibia. Pioneering was in Louw’s blood. I often thought that had he lived one or two hundred years ago, he would have been an explorer of remote and unknown places in the true sense. He was fascinated by every aspect of nature, from the vastness and pristine beauty of the Namib’s wide expanses, to the colour of a grain of sand and the amount of water contained in the leaf of a dollar bush. It was issues such as the sensitivity of the desert surface to vehicle tracks, the removal of historical artefacts, the disfigurement of rock paintings, the indiscriminate removal of plants and the dwindling numbers of game that motivated him in 1987 to take the initiative in the creation of the Namibia Nature Foundation. Today the foundation is an important factor in conservation in Namibia.

Equally at home behind the controls of an aircraft and the steering wheel of a Landrover, he spent many thousands of hours flying, driving and walking over this remote section of the northern Namib, growing to know it better than most. The conservation aspect became increasingly important: the sensitivity of the desert surface to vehicle tracks; the disfiguring mounds, trenches and rusting machinery left behind by miners and prospectors; the dwindling numbers of game. All of this added strength to his conviction that in the long term an area could be protected as a wilderness reserve only if the public were given the opportunity to visit it. [...]

This is an exerpt from the book: Skeleton Coast, by Amy Schoeman.