Short drive to freedom: A personal perspective on the Afrikaans rock rebellion, by Koos Kombuis 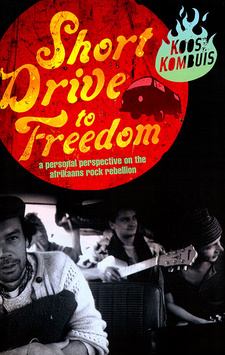 Short drive to freedom is the latest autobiography of Koos Kombuis and introduces his personal perspective on the Afrikaans rock rebellion with unheared insights and confessions, and matured by life.

A lot of stuff has happened since I published my official autobiography. America has a new black president, same as us. My cat disappeared. Madonna got divorced. Nine-eleven has come and gone. There have been many wars. There have been economic catastrophes. There was a hurricane in New Orleans and there was a tsunami in Thailand. My life was enriched by the addition of approximately two children. The planet Pluto disappeared completely. Joost van der West-huizen is a film star. Britney Spears has gone through several hairstyles. Gay marriages have been legalised in South Africa, I'm not sure till when. Russia is once more accumulating missiles. Zimbabwe has gone to hell. The Centurion Waterfront smells. Very few of these things were predicted by Nostradamus. It's been bothering me for some time that my official autobiography has become outdated. There are parts of my life, people I knew - important parts and important people - whom I have badly neglected. Momentous events have been skimmed over. People of note have been ignored. Even in my autobiography I was guilty of downplaying certain events. These events and actions impacted not merely on my own life, but also influenced history. These events constitute a rebellion, a struggle, a national movement. Of course, I've known all along - at least subliminally - that I have been suppressing facts relating to a certain era. If that part of history is so important, if so many other writers have written about it and reseached it, why was it almost completely excluded from my official autobiography (Seks & Drugs & Boeremusiek, Human & Rousseau, 2000)? Yes! Unbelievable as it may sound, that book contains only twenty-one pages about the entire "Alternative Afrikaans Movement". Twenty-one pages. That's it. Silly me. It would have been easy for me to write about it. I would not even have had to do much research about this period in history. I was there myself. My friends and I were right there, in the thick of things. Alas. A lot of those friends are dead now. Those who are not dead yet, wish they were. Those were tough times, there's no point in denying it. Some of those times were downright shitty. And yet there was beauty there, real beauty, in the midst of all the shittiness. Stuff worth writing about. The Struggle was - and still is - more than just the ANC making a stand against apartheid. The Struggle has always been something more than that. It is something that encompasses the birth of our country with its many different cultures. The story of the Struggle, the total history of it, would include tales about all those sailors who died of scurvy on the decks of their Dutch ships, it would include the story of the first Vryburgers as well as the story of the victims of those very same Vryburgers. It would include the various accounts of the first border skirmishes. It would describe die sorrow of the Voortrekkers at Weenen and it would decribe the sorrow in Dingaan's kraal after the slaughter of the impis at Blood River. It would relate the suffering of women and children in concentration camps, the destruction of Sophiatown and the loss of District Six, the demise of our unwavering faith in Calvinism, the rearranging of our priorities, the birth of democracy in the crucible of the so-called rainbow nation. It would tell the whole story, warts and all. It would also speak of the present. To this grand vista of history, I can contribute - relatively speaking - only a tiny bit. I can speak only of the things I experienced first-hand. But speak I must. [...]

This is an excerpt from the book: Short drive to freedom: A personal perspective on the Afrikaans rock rebellion, by Koos Kombuis.

Short drive to freedom: A personal perspective on the Afrikaans rock rebellion

Short drive to freedom is Koos Kombuis's autobiography and his personal perspective on the rock rebellion of Afrikaans language in South Africa.