See You In November. The Story of Alan ‘Taffy’ Brice: An SAS Assassin, by Peter Stiff 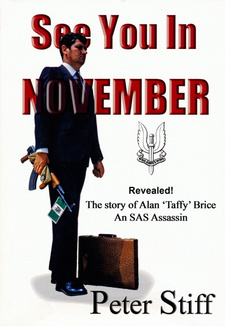 See You In November: Over a period of six years in Zambia, Alan ‘Taffy' Brice’s British 22-SAS team carried out a series of covert operations. Included amongst these were Robert Mugabe’s ZANU-PF and Joshua Nkomo’s ZAPU installations in Zambia, which led to each faction and the Zambians concluding the other was responsible. This culminated in the assassination by the team of Herbert Chitepo, ZANU-PF’s chairman, the man orchestrating their terror war against Rhodesia.

Foreword: Peter Stiffs See you in November, although first published in 1985, is still the most important account of Intelligence warfare that came out of the Rhodesian War. It is the true story of the late Alan Brice, nom de guerre 'Taffy', the leader of the Rhodesian Central Intelligence Organisation's most secret sabotage and assassination team. It is also his first person account of his SAS training and the special operations in which he played a role in Malaya, Borneo, Cambodia, Kenya and Europe. After leaving the SAS he worked for an MI6 front company, Watchguard International, founded by Colonel David Stirling and known in the SAS as The Firm', which employed selected ex-SAS members for special covert, and more importantly, deniable operations for MI6, the British Foreign Secret Intelligence Service. While operating with Watchguard he was involved in a British plot to assassinate Col Gaddafi of Libya, with US CIA cooperation, but the operation was called off by the Americans who had changed their minds. MI6 decided to go it alone but were forced to abort when the CIA found out and threatened to blow the whistle on the operation. And so Gaddafi survived. Sadly, this would eventually cost the lives of all those aboard the ill-fated Pan Amm flight 103, most of them Americans, plus 11 Scots on the ground, when it was brought down over Lockerbie, Scotland, by a Libyan explosive device that had been planted aboard. For six long years Alan Brice led the Rhodesian CIO team in Zambia. It is a remarkable story of high adventure, of bravery, of cunning and of loneliness where the participants knew that if they were caught, Rhodesia would disavow all knowledge of them and certain death - probably by hanging - would follow. In addition to Alan Brice the team comprised a second ex-SAS operator, Hugh 'Chuck' Hind, and a Zambian farmer, Ian Sutherland and his wife Priscilla who by the circumstances was drawn into operations. Their ranks were thinned firstly by the death of Chuck Hind and then by the capture of Ian Sutherland, but despite this they succeeded brilliantly in creating a yawning chasm between Rhodesia's two main guerrilla organisations rear-based in Zambia, Robert Mugabe's ZANU and Joshua Nkomo's ZAPU. It is a chasm that exists to the present day. Using bombs and machine guns they led both parties by the nose on a bewildering dance of death and destruction, successfully deceiving each party into believing their rivals were the culprits. By assassinating Herbert Chitepo, ZANU's chairman, they were responsible for President Kaunda of Zambia arresting all members of ZANLA's military high command as murder suspects and expelling ZANU from the country. It brought ZANU's war effort to a halt for 18 months. The team supplied intelligence for all the major raids mounted by the Rhodesian Security Forces against Joshua Nkomo's external guerrilla rear bases, they attacked Zambian economic targets to discourage them from supporting Rhodesian dissidents - derailing trains, rocketing a fuel depot and failing only by a stroke of ill luck from putting the giant Mufulira Copper Mine out of action permanently. […]

This is an extract from the book: See You In November. The Story of Alan ‘Taffy’ Brice: An SAS Assassin, by Peter Stiff.