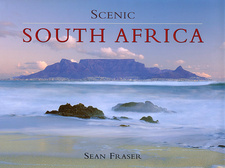 The land we see through the eye of the Sean Fraser's camera is an African world of vibrant colour, fine textures and harmonious song and "Scenic South Africa" is a tribute to the people and places that are South Africa.

Most conspicuously beautiful of the wooded vales of these foothills is Constantia, planted with the Cape's first vineyards and home to some of the city's most highly regarded restaurants. Lined with flourishing vines and luxuriant woodlands, the winding roads cling to the Constantiaberg, passing the prestigious wine estates of Buitenverwachting, the 200-year-old Klein Constantia, and majestic old Groot Constantia which form part of the peninsula's only wine route. It is, however, the grand old estates of the Boland that have earned the Cape its reputation as one oi the world's finest wine-producing areas and it is here, among the lush hills of Paarl, Stellenbosch and Franschhoek, that the very best of South African vines are cultivated and its wines bottled for export. In stark contrast to die green winelands inland, although no less spectacular, is the rocky West Coast. Still the flourishing fishing centre it has been since it was first settled, the wild and rugged shoreline is rich in both flora and fauna and the sea here abounds with marine life. Sheltered by the mountains of the Cederberg, it is this simple landscape of sandveld, renosterveld and fynbos that erupts into fields of colour between August and October when the land emerges from its slumber and the ericas, restios and proteas of the unique Cape Floral Kingdom burst into bloom. Beyond the sheltering mountain range is the considerably less hospitable semi-desert Karoo that stretches across the Cape interior toward the east. This harsh and rather arid veld comprises the Great Karoo and the contrasting wilderness of the little Karoo to the east. On the other side of the Outeniqua Mountains extends the picturesque Garden Route and the unspoilt stretch of the Wilderness Lakes Area. At the foot of the Outeniqua range, the 10000 hectares of the Wilderness National Park and the natural grandeur of the Outeniqua and Tsitsikamma ranges are home to birds, baboons, otters and small buck, which seek refuge in the crystal waters of its streams and the giant yellowwoods of its forests. Of all the entrancing stops along the Garden Route, the finest must be Knysna and the adjoining National Lake Area, a verdant stretch, encompassing the town, the famed 36000-hectare forest, lagoon, and the Heads, that continues to yield stinkwood and yellowwood from its natural forests, and oysters and other seafood delicacies from its bountiful ocean. Nearby Plettenberg Bay, on the other hand, is the most fashionable of the Garden Route's holiday spots and, during high season, its beaches are dotted with sun-seekers. Beyond the Garden Route lies the sometimes volatile and sometimes yielding shore of the Eastern Cape. The rural interior is punctuated with small towns and traditional villages of the Xhosa, while the simple world of the Transkei and its Wild Coast is a remarkably untamed expanse of white beach and rolling hills that extend right into KwaZulu-Natal and mark the upward rise of the Drakensberg. Durban is the heartland of KwaZulu-Natal's north and south coasts, a metropolis of modern architecture and centuries-old edifices dating to its distinctly colonial past. [...]

This is an extract from the book: Scenic South Africa, by Sean Fraser.