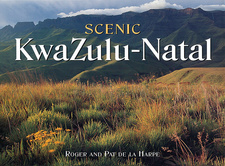 In this first chapter of their book "Scenic Kwazulu-Natal", Roger de la Harpe and Pat de la Harpe introduce the readers to KwaZulu-Natal, the Zulu Kingdom.

Washed by the warm waters of the Indian Ocean on the eastern side of South Africa, KwaZulu-Natal sweeps through tropical beaches, rolling green hills, the lofty crags of the mighty Drakensberg and the incredible biodiversity of some of Africa's oldest game reserves. Its landscapes embrace two of South Africa's World Heritage Sites, the magnificent uKhahlamba-Drakensberg Park and the unique estuarine system of the Greater St Lucia Wetland Park. Traditional home of the Zulu people, KwaZulu-Natal is widely recognised as the Kingdom of the Zulu. Many of its towns and rivers boast historical Zulu names and at its heart lies the vibrant city of Durban, or eThekweni, which beats with a rhythm of its own. Here sights, sounds and smells assault the senses in a multicultural bustle of formal and informal traders, markets and restaurants in an eclectic mix of Western, Asian and African styles. The city's colonial past is unmistakcable, its wide streets dotted with old buildings and quaint shops that reflect the influence of both European and Indian architectural trends. Indeed, Durban has become the place to view Art Deco architecture at its best, along with several fine examples of churches, mosques and temples. Durban is Africa's busiest port and the lively area near the harbour mouth provides an exciting setting for flea markets, dockside bistros and restaurants. It is here, too, that you will find the best fish and chips in town. The largest aquarium in the southern hemisphere can be found at the huge theme park, uShaka Marine World, along with a variety of thrilling water rides, restaurants, art galleries and shops. The harbour has its own vibrancy, hosting huge ships and freighters from around the world, while smaller boats huddle together at several quays along the Victoria Embankment. A number of piers used by both anglers and strollers jut out into the bay, where endless beaches are the city's greatest attraction. Along the famous 'Golden Mile' up-market hotels with superb ocean views jostle for space with sidewalk cafes, amusement parks and swimming pools. Here curio sellers and craft markets add to an energetic buzz that is typically Durban in style. To the south of KwaZulu-Natal's leisure capital, across the Umkomaas River, is a stretch of coastline famous for its beaches, lagoons and vibey holiday towns. Like Dutban, this seafront, known as the South Coast by locals, enjoys warm weather year round and attracts sun seekers in their thousands, particularly during the peak school holiday periods in April, July and December. Fields of sugar cane, banana plantations and luxuriant indigenous bush vie fot space between the villages that hug the beaches and rocky coves. Hibberdene, Uvongo, Margate, Ramsgate and Port Shepstone are but a few of the seaside towns that offer affordable relaxation and adventure. Cafes, restaurants, bars and shops, as well as golden beaches and warm seas cater for most tastes, while an impressive number of golf courses, 11 in total, attract an endless stream of golfing enthusiasts. Surfing, snorkelling and scuba diving are particularly popular and the fishing is exceptional, especially when the shad are running. [...]

This is an excerpt from the book: Scenic Kwazulu-Natal, by Roger de la Harpe and Pat de la Harpe.

South Africa's premier playground thrives on contrasts: KwaZulu-Natal Adventures in Culture & Nature uncovers the many jewels waiting to be found.