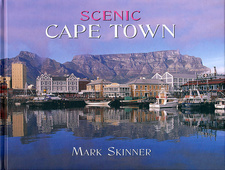 [...] Pounded by the stormy Atlantic, the island is the breeding ground of a multitude of seabirds and home to an array of indigenous flora, and historians and conservationists have succeeded in having the sensitive ecosystem proclaimed a national monument and World Heritage Site. Kirstenbosch National Botanical Gardens is one of the country's top attractions,second only to the V&A Waterfront. Far across the 11.5-kilometre stretch that separates the wave-lashed island from the mainland looms landmark Table Mountain, which, according to local legend, watches over and protects the people of Cape Town. With Signal Hill to the northeast and Lion's Head to the southwest, the great sandstone mountain envelops what is today known as the City Bowl, the economic hub of Cape Town. At the centre of this relatively small metropolis, the population of the greater metropolitan area is currently around four million, is the centuries-old Castle of Good Hope, the pentagonal fort built from stone excavated on Robben Island in the 1660s by the Dutch governor to protect the citizens of the small colony. As one of the country's foremost museums and the regional headquarters of the national defence force, the old Castle now presides over a bustling Grand Parade, once the stomping ground of British and Dutch militia who occupied the Cape at various times during its rather turbulent history. Today, its paved confines serve as a much-needed car-park in the city centre and, on Wednesdays and Saturdays, as the site of an eclectic market specialising in fabric and haberdashery. Alive with the animated banter of vendors and the chit-chat of pedestrian traffic, the market is second only in popularity to the most famous of Cape Town's many flea markets, that on Greenmarket Square. Originally established as the local marketplace in the early 1700s, Greenmarket Square attracted farmers from far and wide and, true to its tradition as a meeting place and trading ground, it continues to hum with the feverish activity of bargain-hunters sifting through the stalls of knick-knacks and souvenirs, which appear to cover every inch of the cobbled square overlooked by the grand old edifices of the Old Town House, housing the old masters of the Michaelis Art Collection, and the Metropolitan Methodist Church. Below At the foot of the Klein Leeukoppie lies Llandudno, its picturesque beach hedged in by granite boulders and one of the best beaches for surfing and sunbathing. In fact, interspersed with the contemporary structures of modern times is a conglomeration of Dutch and Victorian architecture, from both the Cultural History Museum in Adderley Street to the stately Houses of Parliament that run down the western stretch of the Company Gardens on Government Avenue. At the top of Government Avenue, where it meets up with Oranje Street, is one of Cape Town's most recognisable buildings, the candy-coloured Mount Nelson Hotel, for 100 years the home-away-from-home for heads of state, royalty and movie stars alike. The stately luxury of 'The Nellie', however, is a far cry from the row upon row of neat little cottages to the west, which are known collectively as the Bo Kaap (upper Cape). [...]

This is an extract from the book: Scenic Cape Town, by Mark Skinner and Sean Fraser.