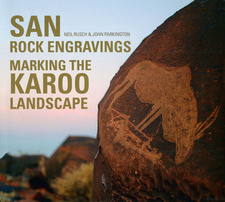 San Rock Engravings explores the visual legacy of bushman artists, the markings they left on the Karoo Landscape and the meanings that could be attached to them. John Parkington and Neil Rusch are experts on this field.

Engravers who were hunters and gatherers: Images engraved on rock abound in the arid Karoo, tangible signs of the presence of the people who hunted and gathered in this region for uncounted millennia. Before farmers came into southern Africa from the north, about 2 000 years ago, and long before colonists landed at the Cape 500 years ago, all people in South Africa were hunters and gatherers. In a few cases, we know what they called themselves, but mostly we have inherited the generic term Bushman from early colonial-era travellers, or the overarching term 5-9/7 derived from the usage of Cape pastoralists. Both terms have derogatory connotations, but either may be relatively inoffensive to some modern descendants. Where hunters and gatherers survived until recently, we do know the preferred names of groups - in the Kalahari: Ju/'oansi or G/wi or IKung, and in the Karoo: /Xam - which are often the names of the languages spoken. It is likely that southern African hunters and gatherers never needed a term that distinguished their lifestyle from that of farmers or herders, and it is equally likely such a distinction would have been impossible to make. In this book, we use the general term San, but emphasise the hunting and gathering aspect of their lives and artistic expressions. Engravings are images inscribed by pecking, scraping or incising into rock surfaces so as to make the required shape or form visible as a lighter colour against the dark, unmarked rock face. In some areas, engraving was a more effective technique than the alternative of applying paint to a surface. Southern African hunter-gatherers produced millions of engraved and painted images over the 20 000 years or so before farmers arrived, and for some time after that. Hunter-gatherers elsewhere in the world also engraved and painted, and to some extent the reasons and purposes were rather similar. As we will show, the imagery is deeply rooted in what it means to be a hunter or a gatherer; once depicted, the images remain powerful symbols for future generations. Once marked, the landscape becomes a kind of stage set on which hunting and gathering is acted out.

In the arid interior of southern Africa, hunter-gatherers engraved more than they painted, whereas the reverse is true around the present coastal regions and associated mountain ranges. Archaeologists are interested in why hunters and gatherers painted or engraved, particularly because no artists survived to be interviewed by anthropologists or art historians. Some artists, as we will see, nearly made it into the written record we call history However, scholars no longer believe that the engravings were mere decoration, and can easily show that the images are not a menu, nor a checklist. Excavations of food remains from archaeological sites make it very clear that what hunter-gatherers chose to engrave bore little or no relationship to what they actually ate, or to the animals they encountered. People were very selective about what and where they engraved, which gives us clues as to why they did this.

In the absence of the opportunity to ask an engraver for the meanings and motivations, we must look to the surviving hunter-gatherers of southern Africa who, while not artists in this sense, did create imagery in other media, do talk almost incessantly about animals, and did develop expressive forms such as songs, dances and stories. Hunter-gatherers were gradually displaced, incorporated and often intentionally exterminated from much of southern Africa over the past two millennia. They survived longest in areas not attractive to pastoralists with herds of cattle or flocks of sheep, or to farmers with domestic stock. There are no textbooks. The skills that adult men and women need to perpetuate the existence of their families are those of acute observation and understanding of their surrounds, of the distributions, life cycles, behaviours and interactions of the plants and animals with which they share the land. Hunter-gatherers are famously expert ecologists. [...]

This is an excerpt from the book: San Rock Engravings. Marking the Karoo Landscape, by John Parkington and Neil Rusch.

San Rock Engravings explores the visual legacy of bushman artists, the markings they left on the Karoo Landscape and the meanings that could be attached to them.

The Forgotten Frontier. Colonists & Khoisan on the Cape’s northern frontier in the 18th century

The Forgotten Frontier. Colonists & Khoisan on the Cape’s northern frontier in the 18th century: What happened to the Khoisan societies of the Cape?