Return to Camdeboo: A century's Karoo foods and flavours, by Eve Palmer 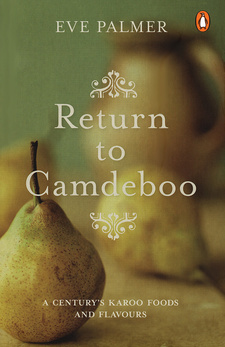 The collecting, researching and writing work on 'Return to Camdeboo: A century's Karoo foods and flavours' was done by late Eve Palmer, her brother Maurice Palmer and her sister-in-law Sita. The same sort of life still they lived there, still goes on and the sound old cycles continue; food still comes from veld, orchard and gardens and the storerooms are full; there is hard work, planning and good cheer, and a good cook is still paramount, as she always has been.

Some 150 years ago a traveller tramped along the old wagon road that lay between what is now Pearston and Graaff-Reinet in the Cape Midlands. He was an unusual one to be on that God-forsaken Karoo track, which had never seen an archdeacon on foot, and certainly never a bishop - for this was Archdeacon Nathaniel Merriman, later to become the Anglican Bishop of Grahamstown, making one of his early visitation journeys. A product of an English public school, an Oxford MA, and a man numbering a prime minister among his friends, here he was in 1849, footslogging it over a desolate and burning countryside with his bag on his shoulder. He had no money for a horse. He had come here by devious ways from the little parishes of England to serve God and the Church of England in a parish so vast we can hardly envisage it: the entire eastern district of the Cape Colony. He had to bring his church to this countryside, to get churches built in the villages, and to link Anglicans living on isolated farms. He proved himself a very good missionary, but he was something more. He was also a good chronicler, one of that especial race who bring life to the happenings of every day; he recorded it all with exuberance and racy humour in five little pocketbooks, his journals, that are now Africana. On that journey of 1849 he was given hospitality on a farm between Pearston and Graaff-Reinet on the Plains of Camdeboo. 'Gollebos; he called the place, but it was the 'Galgenbosch' or 'Gallows Tree', the Cranemere of later years, which has now been the Palmer family home for well over a century. It was the first recorded instance of the farms hospitality. [...]

We have to go to C. Louis Leipoldt to see what a melktert was: a custard intensively flavoured and sinfully rich', with the pastry rolled out fourteen times at least! This melktert recipe is also an old one. It does not have the sinful richness of Leipoldt s but The Farmers Weekly, that printed it, claimed it was the prince of melkterts. Time has not changed this. It is.

Make a pastry by rubbing 6 oz butter into 6 oz flour. Moisten with the yolk of one egg (keep the white) beaten up with one and a half tablespoons of cold water. Using a large knife, mix pastry a little, and then knead lightly with the hand until you have a smooth round ball. Divided into half, roll out and place in two shallow cake tins or fireproof plates, prick and bake in a moderate oven. While the pastry shells are baking start the filling. Place in top of double boiler Wi large cups milk. When boiling, pour over 2 1/2 to 3 level tablespoons flour mixed with two rounded tablespoons sugar. Add to this the beaten yolks of two eggs. Return to double boiler and add two tablespoons butter. Stir constantly until thick and smooth. The mixture will form lumps at first, but continue stirring until smooth. Remove from fire and add half a teaspoon vanilla and half a teaspoon almond essence. This blending of flavours is important. Then fold in the three egg-whites, stiffly whipped. Divide the filling between the two shells, return to oven an bake 15 minutes, when the filling will be found to have risen high and have tiny brown flecks where the egg-white has browned. Remove tarts; dab lightly with melted butter and sprinkle generously with cinnamon and sugar. Always reheat these tarts before serving. The filling rises again beautifully when reheated but be careful to have the oven just a moderate heat for the reheating process. The crust can be very crumbly and needs care.

This is an excerpt from the book Return to Camdeboo: A century's Karoo foods and flavours, by Eve Palmer.

Return to Camdeboo: A century's Karoo foods and flavours

''Return to Camdeboo: A century's Karoo foods and flavours' as well as late Eve Palmer's previous memoir, 'The plains of Camdeboo', is a wonderful and soulful read.

The plains of Camdeboo

Lovingly described in her classic book of the Karoo, The Plains of Camdeboo, Eve Palmer introduces to the quintessential Karoo farm and her home Cranmere.