Restios of the Fynbos, by Els Dorrat-Haaksma and H. Peter Linder 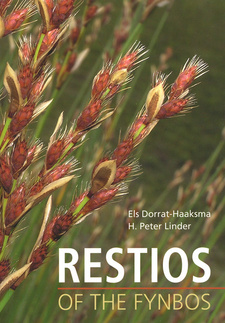 Beautifully illustrated with photographs and over 400 colour images, this new edition of Els Dorrat-Haaksma's and H. Peter Linder's respected guide, Restios of the Fynbos, has now been revised, updated and freshly designed for greater ease of use.

I have had the pleasure of tramping through fynbos with innumerable plant lovers. It is such a delight to sec what catches their eye, plantwise. Colourful bulbs, flashy proteas and sticky, gaudy ericas invariably attract attention of the 'what's that?' or that's this' kind. Seldom, however, am I stopped to gaze at a restio, thumb through its bracts, and admire its graceful culms. But this is changing, thanks to Els and Peter's magnificent guide. Restios demystified. And so should they be, these quintessential features of fynbos. From the arid sandplains of Namaqualand to the black-soil bogs of mist peaks, wherever there is fynbos, there are restios. Beautiful restios - wind whipped elegias, like a billion caramel cusps, on the damp flats at the Cape of Good Hope; giant cannomois, an elegant border to a soothing stream on a hot summer's day in the Cederberg; stately dekriet, culms glistening with beads of moisture, in the early morning mist of the Agulhas Plain. So it is with unreserved enthusiasm that I acclaim the re-issue of Restios of the Fynbos. As a guide it is perfectly detailed, crisply written and innovatively illustrated (the species are faithfully depicted as three-dimensional scans of actual plants, a novel and appropriate approach for a plant group with such exquisite intricacy of form and function). It you are intrigued but intimidated by restios, buy this book. Very soon you will be keying out your first genus (all 16 are described) and delving further, perhaps matching your specimen to the description of the 119 commonly encountered species are included in the guide. The Restionaceae or, as they are commonly called, the restios, are a family of perennial, evergreen, grass-like plants. They range from 10 cm to 3 m in height and often have a tufted growth form. The plants have erect, green, photosynthetic stems, with leaves that are reduced to leaf sheaths. The flowers are very small and are contained in spikelets, which in turn make up the flower heads or inflorescences. The family is dioecious, i.e. the male and female flowers are borne on separate plants, and are wind pollinated. The fruit is a nut or capsule. The Restionaceae family is a typical 'southern' or 'austral' plant family. It is found on all the southern continents, with ±357 species in Africa, ±150 species in Australia, four species in New Zealand, a single species in South America and a single species widespread in South Hast Asia. However, only in the Cape Floristic Region of South Africa do the Restionaceae dominate the vegetation over large areas. With so many species and such ecological dominance, the family is obviously of great importance, and this leads to an interest in its biology, ecology and origins. The distribution range over all the southern continents has led to suggestions that the family is ancient, dating to the end of the Cretaceous period, more than 60 million years ago, when the southern continents were still in close proximity to each other, forming the supercontinent Gondwana, a hypothesis supported by fossil pollen records from southern Africa. [...]

This is an excerpt from the book: Restios of the Fynbos, by Els Dorrat-Haaksma and H. Peter Linder.

In Celebration of Fynbos

Showcases 50 plants from the fynbos kingdom, focusing on how to use them in gardening, culinary, medicinal, healing and decorative ways